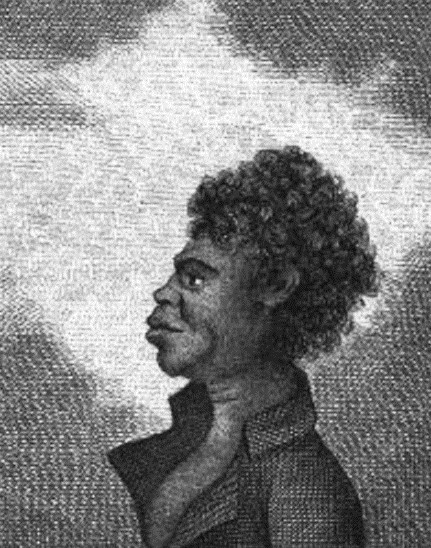 Image from the journals of James Grant

It’s hard to think of a born and bred Australian who inspired more place names than Bennelong, or Beneelon, of Sydney.

His name lives on at Bennelong Point, where the Opera House now stands; the electorate of Bennelong; and Bennelong Park at Kissing Point. A genus of shrimp, Bennelongia, was also named after him. Some suburbs, streets and locations similar to Bennelong’s other traditional name, Woollarawarre, may also owe their origins to this immensely interesting man. The development at Barangaroo is named after his first wife, herself a powerful figure amongst the Cammeraygal people.

Bennelong was a member of the Wangal clan, whose country stretched from Parramatta to Darling Harbour, and included highly productive estuarine hunting grounds. He was abducted from his people on the orders of Governor Arthur Phillip, apparently in an effort to better understand local Indigenous groups. At that time Bennelong was around twenty-five years old, described by a Captain Watkin Tench as being: “of good statue, and stoutly made, with a bold intrepid countenance, which bespoke defiance and revenge.”

The young Bennelong lived in Governor Phillip’s home and soon had a working grasp of the English language as well as a taste for food and liquor. He could, apparently, eat a week’s rations in a day. Despite this largesse, the bush life called to him and he escaped after a few months. He turned up later at Manly in a confrontation between armed parties that resulted in Phillip being wounded by a spear. Bennelong was so worried about his former host that he took to hanging around the settlement again. By 1791 he lived in a brick hut built for him at Bennelong Point.

Barangaroo gave birth to a daughter called Dilboong, but the young mother died soon after. Her body was wrapped in an English blanket, and burned along with a basket of her fishing gear. The service was accompanied by a traditional shower of thrown spears.

Dilboong also died while still an infant, and Bennelong begged Phillip to let him bury her in his garden. He produced only one other confirmed descendant, a boy called Thomas Coke, most likely the son of his second wife. Thomas was raised by a clergyman and died at the age of just twenty.

When Governor Phillip returned to England in late 1792, Bennelong went with him.

According to an account by Royal Navy Lieutenant James Grant:

“Benelong (sic) visited England with Governor Philips, and returned to New South Wales with Governor Hunter; and I am sorry to add, far from being improved by the voyage. He has unfortunately acquired a fondness for strong liquors, and is apt to take them to a great excess, at which time he proves very disorderly and ungovernable. He still retains the highest respect for Governor Philips (sic), and discovers a grateful sense of the favours received at his hands.”

On his return, Bennelong found that his second wife had left him, and he spent the rest of his life caught between two worlds. He was an adviser to Governor Hunter, but also an elder of his people, participating fully in ceremonies and payback fights. His two favourite activities, it was said, were “love and war.”

Bennelong died in January 1813 at Kissing Point, and was buried in an orchard belonging to his friend and early brewer, James Squire. The grave site has recently been located, now under a front yard in the suburb of Putney.

Get the book, “Galloping Jones and Other True Stories from Australia’s History” at http://ozbookstore.com/item/gallopingjones

Click here to view the sources for this story.