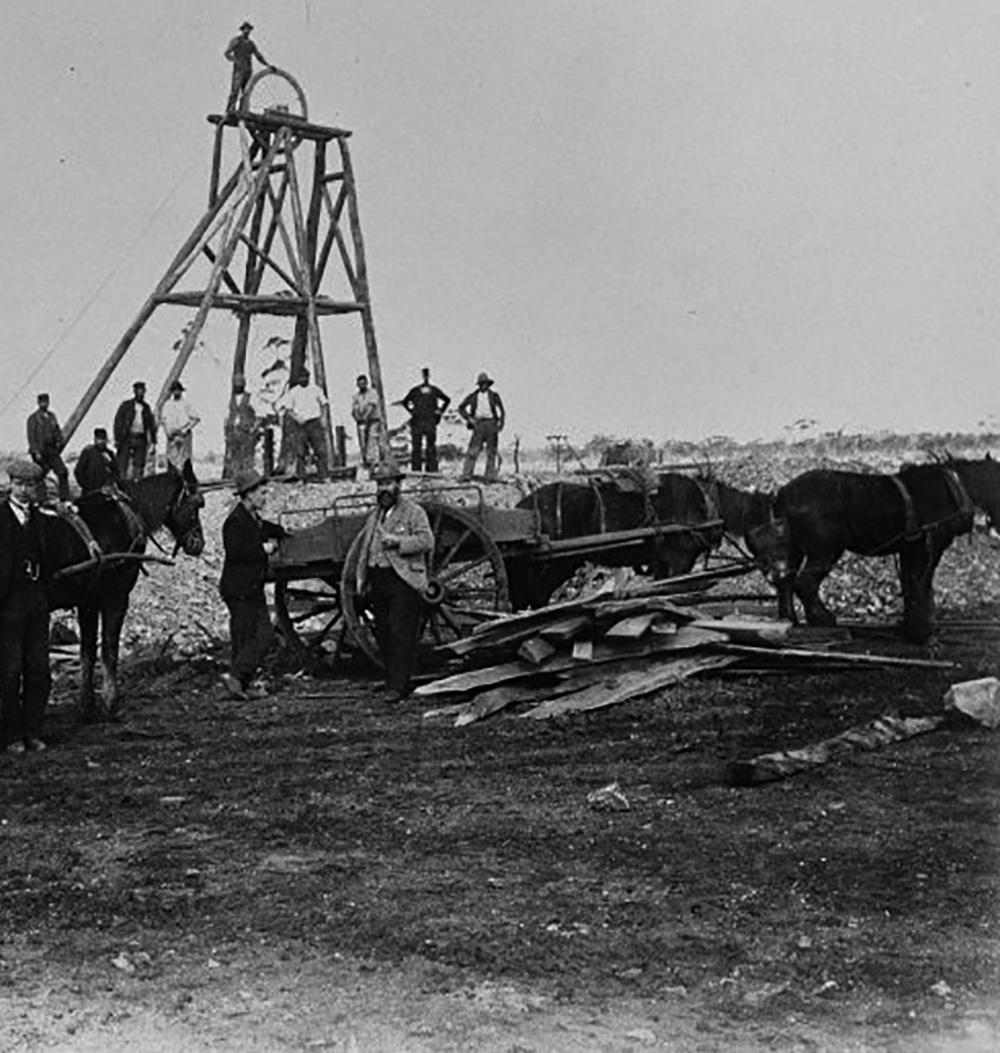 It was a strange thing, but Lainey didn’t throw her husband out the next morning, nor even the one after that. By the third day Luke Phillips seemed to be a fixture at the camp. No one said much about it, but Lainey changed her habits noticeably, taking trouble with her hair and washing a little more often.

‘What’s that blue thing in yer hair?’ Will asked her one evening as his sister returned from the screened washtub at a far corner of the lease.

Lainey turned on him furiously, ‘It’s a ribbon, ya dullard. Ain’t it normal fer a woman to make ‘erself presentable?’

Will shrugged. He couldn’t figure out why she was taking so much trouble for a husband she’d run out on.

Luke, as Will knew, was a hard worker from way back, and laying about the camp was not his style. When fetching firewood didn’t fill the time Luke made some improvements around the camp, for he was a wasn’t a bad bush carpenter. Then he grabbed a pickaxe and insisted on taking his turn down the mine shaft.

‘There aren’t no gold here,’ Will confided in him, ‘at least nothing to speak of.’

‘What? Why in blazes are you diggin’ then?’ asked Luke, holding the pickaxe by the handle and leaning on it.

‘Well,’ said Will. ‘A couple of English brothers have got up the big mining company yonder, and its gonna float on some stock exchangin’ outfit or other. They are payin’ us good money to dig up rock, so they can chuck in a few specks of the good stuff here and there, and make it look like the whole field here is as rich as King Solomon’s own mines.’

‘What a lurk!’ exclaimed Luke. ‘I imagine they’ll make a fortune out of it too. So there’s no gold here at all?’

Sam had just walked up, took his seat and removed his hat. ‘A little gold. Three gold leaders here – used to be.’

‘Faith, Hope and the Prodigal,’ continued Lainey. ‘An’ we reckoned on puttin’ our mine right here to chase the Prodigal – supposed to be the richest one of the lot, in places. But the parts a’those leaders that were found, down the valley there, were worked out, an’ they ain’t reappeared.’

‘They should have called them Misery, Heartbreak and Bullshit,’ said Will. ‘If it wasn’t for Henry Sutton’s cash money we would have moved on weeks ago.’

Luke shrugged, ‘Well you’ve still got to fill the dray with ten ton of rock each week, so it won’t hurt me to help do that.’ He looked at Lainey. ‘I’m hoping when this is all over that my wife will ride back south with me … home.’

Lainey shook her head and spat on the ground. ‘You men don’t know when you’re well off. Right here you got a wife, a home,’ she pointed a finger at the ragtag tent they’d been sharing, ‘‘an’ gainful employment, and now you want to drag me back to that damned farm of yours.’

‘Is it too much to ask,’ said Luke, ‘for a man to want his wife to be beside him on the land?’

‘Too much to ask fer me,’ said Lainey emphatically. ‘Now take that pick and get to work, or I won’t be sharin’ a swag with you either, that’s fer sure.’

Luke hefted his pick and waved it at Will. ‘Show me where to go and what to do and I’ll get busy at it.’

Will led the other man to the shaft and down the ladder. At the bottom, slush lantern in hand Will took him along the drift to the face. ‘That’s where we’re digging. Don’t go faster than we can shore it up, and if you see any cracks get out of there.’

‘What if I see some gold?’ asked Luke.

Funnily enough, Little Blue, who didn’t take to strangers, as a rule, accepted Lainey’s husband after a day or two. He liked Luke’s boots most of all, and rare was the morning that didn’t start with that poor man bellowing darkly, ‘What’s that fandangled pup done with me boot this time?’

‘Just find it an’ stop yer hollerin’,’ Lainey would say.

This was followed by the tromping of feet, and an eventual, ‘Here it is, now don’t take it again, will you Blue?’

And for almost a week this routine went on. There was only room for one miner at the face, and the four of them took turns, with another barrowing the rock along the drift, another operating the windlass, and the other snatching a rest or cooking.

One late afternoon the crew came up from the shaft, and took their places around the campfire. Lainey had ridden to Wilga for supplies, and brought back bottled beer. She’d just filled four mugs when Luke took a long swig and made an observation.

‘That was a long hour, that last shift at the face,’ he said. ‘But I did see some of that fool’s gold you were talking about. By calamity I never knew it was such pretty stuff. A whole fandangled seam of it.’ He brightened and turned to Will. ‘It’s lucky you warned me not to fall for it.’

It was a strange thing, but Will was no longer there. Beers forgotten, Sam and Will were running for the top of the shaft, with Lainey not far behind. Not one to miss out on what seemed like fun, Luke joined them, with Little Blue barking from the top as the ladder creaked and groaned with their combined weight.

The four of them crowded along the drift, all the way to the face, packed so close they could scarcely breathe. Will, who’d had the presence of mind to bring a lantern, lifted it high. None of them said a word at first, though Lainey swore something unintelligible under her breath.

Will felt a lump in his throat. This wasn’t fool’s gold, it was rich, native reef gold, yellow, almost orange in places, impregnated and surrounded by the quartz seam, and as thick as a man’s leg.

‘The Prodigal,’ breathed Sam. ‘We found it.’

‘So this ain’t fool’s gold then?’ asked Luke.

Will shook his head. ‘No. It’s a bloody fortune you flukey barsted.’

Despite the lack of space Will managed to shake hands with Sam first, then the others in turn. Then he said, ‘When we go up top, no one is to whoop, no one is to holler, or say one thing out of the ordinary. No one up there must know about this, least of all bloody Johnson or Henry Sutton.’

The silence stretched on for a long time. They were all busy with their own thoughts of how the gold would affect them. Finally, when they filed slowly up top, they picked up their beers and drank to good health and long life, just as they had on other occasions.

Still, Will couldn’t ever remember seeing a smile on Sam’s face like the one he wore now, and Lainey’s eyes sparkled like the brightest stars in the sky. They’d had some fun together, but never a windfall like this.

How would they get the gold out and receive fair value for it? That was the question.