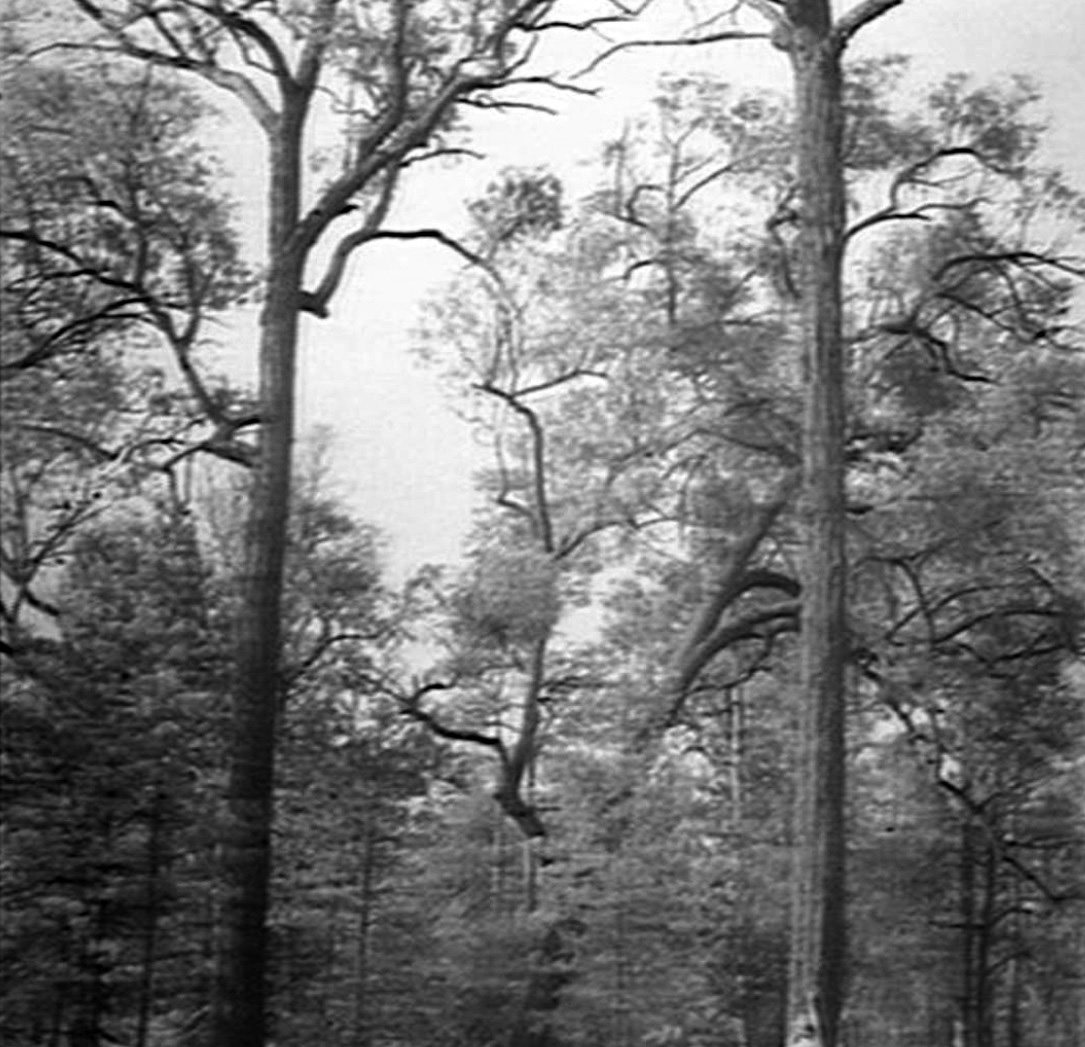 Four hours out of Coonabarabran, Jim spotted a good flat camp in a clearing that had been used by travellers before. It was a picturesque site, surrounded by cypress, ironbark and Pilliga box. A spring-fed pool, with lilies scattered over the surface was the real attraction.

To the accompaniment of a chorus of frogs and crickets, Jim unsaddled his pack and riding horses, then laid his new acquisition – that special Jack Wieneke saddle – on a handy part of a fallen branch, then made his camp as normal.

He cooked a feed of fresh bloody beef liver that he had bought from the butchery in town, then took his hatchet out, ground the blade to a fresh edge on his whetstone, and took a wander around the nearby trees. He selected a branch from a bull-oak tree, chopped it out and took it back to camp. He used his knife to whittle away branchlets and to shave off the bark.

When this was done, he unrolled his swag, stuffed items from his gear inside to make it look like he was sleeping there, and built up the fire. In pride of place, in plain view, he sat Tom Brody’s saddle so that it would be visible in the firelight. Now he took his rifle and the club he had made a few hundred yards back down the track, where he took station behind a thick trunk.

Not thirty minutes passed before Jim heard a rider mooching along cautiously up the track. Even with the meanness of the moon Jim could see that it was Tom Brody, and he heard the man’s hiss of indrawn breath – seeing his own saddle displayed so invitingly in the firelight. Jim watched Brody dismount and tether his horse, take a Colt revolver from a holster and check the load. While he was thus occupied, Jim padded silently up behind him.

With a silent rush he clocked the big man on the back of the head with the club. Bull-oak was one of the hardest timbers known. Tom Brody fell like a widow-maker branch to the ground. Jim bent to one knee and checked both eyes in turn.

It took ten minutes for Jim to drag the big man up to camp and truss his wrists and ankles. This done, and with a fine horse grazing nearby with his own plant, Jim made a billy of tea and filled a pint pot. His carbine lay across his lap, and he passed the time pushing cartridges into the loading port, then levering them out again, one by one.

He was still drinking tea when Tom Brody came back to consciousness. It was almost comical to watch. The eyes flicked open; stared across the camp at Jim. He moaned and tried to move one hand to massage his head. Realised he couldn’t. Glared at Jim again. Then came a roar like a bull in rut.

‘You!’ Tom Brody shouted. He fought the ropes like a tiger, before finally exhausting himself. This was followed by some of the most inventive and colourful swearing Jim had heard, including allusions to his birth, his character, and the friends he chose to ride with.

By the time Jim had finished his tea, Tom Brody had run out of bile to fuel his tirade, and was sitting, breathing with his mouth open, glaring at his captor.

‘Evenin’ bloke,’ Jim said, tipping one hand to his head in a mock salute.

‘I’ll cut your black throat for this,’ Brody warned with menace.

‘I want my saddle back.’

‘You’re a fool. No man alive wants the likes of me on his tail.’

‘There’s a reason, Mr Tom Brody. You an’ me have business to discuss. One of me best mates – Will Jones – stands accused of a murder that Long Douglas tried to pin on ‘im. I was there for that cruel man’s last hours and he cried out certain things. It seems to me that you might know information that would see me mate pardoned.’

‘Speakin’ of low-lifes,’ said Jim, ‘how long’ve you been beddin’ Long Douglas’s missus for? Hell, you didn’t even know he was dead and it seems to me that you’ve been livin’ in her house.’

‘That’s none of your damn business.’ Brody hawked in the back of his throat and spat. The result fell short, landing in the fire and sizzling.

Jim ignored it, ‘I’ll let you go, with your horse, if you tell me who shot John Clarke, and why he was carrying a package of poison that killed McCartney out at Kyungra Station.’

‘You’ll let me go? Do you think I’d take a black fellow’s word on that?’

Jim shrugged. ‘That’s  up to you, bloke, but otherwise I might just harness up that horse of yours an’ use him to snig ya deep into the forest an’ leave you there. No one would find you – not until you started to smell anyhow.’

Tom Brody laughed, as if at a very funny joke. ‘Alright then, I shot John Clarke. So what? Try getting me to say that in front of a judge.’

‘Why did ya shoot him, bloke?’

‘Well the poison idea was hatched by Long Douglas’s himself. The three of us, Me, Joe McCartney and Long Douglas had been shareholders in that Kyungra Station for a lot of years. Long Douglas wanted to sell out – he had gambling debts you see, but McCartney wouldn’t hear of it, and neither could he raise the funds to buy us other partners out. Long Douglas’s creditors were pressing on him, so he hatched a plan to kill off McCartney at arm’s length, with Clarkie ridin’ north to Queensland to find someone to carry the package.

‘I wasn’t a fan of the scheme myself, and I rode to where Clarkie was setting off, and the three of us argued. I lost me temper and shot Clarkie to stop him from going. I didn’t mean to kill the poor bastard – even worse he’d already got on his horse and it bolted with him dying in the saddle.’

Jim took it all in, ‘One thing doesn’t make sense. The package with the poison was signed LHD. Long Douglas’s first name was Roger.’

‘A bit of a joke. We used to call him Long Harry – LHD.” It was something that Joe McCartney would know, but not anyone else who might come across the package. Now let me go. You said you would. And I want my saddle too.’

Jim shook his head, ‘I told ya. That saddle is mine now. In return for having to go on the run for a murder that you done yourself.’ He stood, stretched, then fetched the horse. He cut the bonds on his captive’s ankles first, helping him to mount up, then gave back the Colt revolver, after throwing the cylinder of cartridges into the scrub. Last of all he untied Tom Brody’s wrists.

Tom Brody looked as if her were about to ride off when he reached somewhere into his clothing, or perhaps the saddle bag and withdrew a tiny derringer pistol, aiming it as fast as a snake at Jim. He fired before Jim could raise his carbine.

The ball struck Jim deep, then there was a clatter of hooves as Tom Brody’s horse skittered away.

Jim finally managed to raise the carbine and fire one despairing shot, and by then he was falling to the roadway.