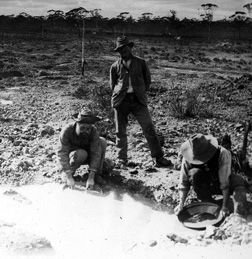 For three more weeks Will, Sam, Lainey and Johnson loaded their ten ton of ore onto a dray bound for the battery, and in due course received a cheque of between seven and eight pounds. Even a one-fourth share was enough to keep them in meat, flour and the rum; about the same as a stockman’s wages, and more than Will had earned on a regular basis for years.

One day Johnson’s dog followed him to work and he and Little Blue had their second fight. They were into it in an instant, whirling and biting, holding on and letting go, making an almost continual snarl between them. Will’s dog was not a holder, he was a biter, and his sharp teeth left puncture wounds on the other animal’s legs and muzzle.

The other dog, with his terrier ancestry, was bigger and stronger, and he knew how to grip and cancel out the smaller dogs energy. Yet, Little Blue never gave an inch of ground, and his eyes glittered with enjoyment at the contest.

‘Rossie, stop that boy,’ Johnson yelled half-heartedly, and it was up to Will to enter the fray, wearing gloves, and drag Little Blue out, wet with a little blood and the other dog’s saliva.

Separated now, they were tied up in separate areas of the lease, both still glaring and growling, making Will wonder how it was that some dogs got a set against each other right from the start, and others became friends. Just like us, he mused to himself.

Sam grew increasingly quiet as the days went by, and one afternoon he started behaving strangely, filling iron pails with samples of stone from various places in the shaft and setting them aside. He wouldn’t say a word about what he was up to, but the next morning he told Will that he was not going down the shaft that day.

‘Fair enough mate, but what are you gonna do?’

Sam shrugged, but Will watched him when he had a chance. The hardworking Cantonese lugged water up from the tank, then set to crushing rock by placing small amounts in a flour bag and smashing it against a boulder with a sledgehammer.

After an hour or two of crushing rock Sam started panning, still saying nothing, his face serious. Will tried to ignore him, but the strange behaviour was troubling. It made no sense. There was a steam engine and stamp battery available to crush and process the rock—why the hell would Sam want to do it by hand?

It wasn’t until that evening, when Sam, Lainey and Will were together, eating a meal of mashed spuds and sausages that Will brought up his friend’s strange behaviour.

‘You done a bit of panning today,’ Will said.

‘A bit?’ Lainey added. ‘He’s panned about a hundredweight of rock all crushed to powder.’

Will grinned, ‘Our new mate Johnson reckoned you was trying to take the gold out of that rock for yourself.’

The words troubled Will, but he leaned forward and cleaned his plate into the fire before he commented. ‘What do you mean? We got an ounce and a half to the ton last week.’

Sam shook his head. ‘No gold here. All that rock I pan today. Not a speck of gold.’

‘Maybe you just found yourself rocks that weren’t so good.’

Sam started to look agitated. ‘No gold.’ He waved an arm back at the lease. ‘No gold.’

Will scratched his head, ‘Well why does Henry keep payin’ us then? Only a crazy person would pay for gold that isn’t there.’

‘I’ll go and see Henry tomorrow,’ said Will. ‘I’m sure there must be an explanation, or else we’re all gone stark ravin’ mad.’