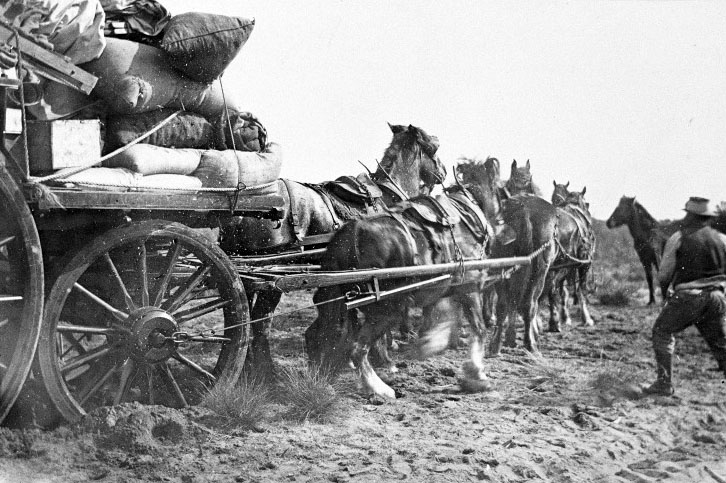 With five riding horses, four packs and one dog, the little group rode to the north at a good clip, anxious to leave Long Douglas and his extradition warrant far behind. They kept to bridle tracks along the Barcoo, leaving the main roads to Cobb and Co coaches, bearing travellers and government officials, and honest folk with nothing to fear from the law.

Within a few days Little Blue could walk alongside Will’s gelding for most of the day. Tiring by the middle afternoon, Will would lift him up onto his horse, where he would sit forward of the saddle.

After a week or two the pup seemed to gain a mountain of energy. Not only could he match the horses all day, but in camp he became a crazy whirlwind, stealing boots and chewing any unattended object, as well as scavenging from plates left on or near the ground. He also gained a prodigious appetite. Keeping the dog fed became a preoccupation.

‘Time to start training that pup,’ warned Jim, and Will took up the challenge. Before long Little Blue could sit, drop, and stay. Most of the time.

Travelling at a steady but not hectic pace, keeping clear of drovers and station hands, they camped each night on a suitable waterhole, and ate yellowbelly from the river, caught with Sam’s skill on the cat-gut line. Several times Jim retraced their steps to check for pursuit, and found no sign of police on their tail.

Even so, assuming that Long Douglas and his patrol were somewhere behind them, they had decided not to travel openly by their real names. Will introduced himself to the few station workers or travellers they encountered as Thomas; Jim posed as a horse tailer and no one asked his name. Sam pretended to be a Chinese cook.

‘I ain’t posin’ as yer damn wife again,’ said Lainey to Will. ‘Jest about made me vomit last time I ‘ad to do it – down in Eulo before ya got yer stupid self locked up.’

‘Well how do we explain a woman ridin’ with us then?’

‘Simple, I’ll pretend to be a bloke.’

Lainey packed her hair up into her hat, borrowed men’s clothes from Will, altering them around the waist to fit. She practiced a gruff voice, and became ‘Albert.’ This was a role she seemed to love playing, and she would swear like a trooper and cultivated phrases like, ‘darn you blokes need a good talkin’ to wiv me fists,’ or ‘let’s go to town and git us some lassies.’

Near Isisford, a settlement they kept a good distance from, they came upon a wagon loaded down with stores, bogged to the bolsters on the far side of a river crossing, in a wallow of slick mud. In attendance were two poor station rouseabouts, and an overseer with a jumped-up attitude.

‘Where did you learn yer manners, mate, a pig-pen?’ drawled Will.

‘Now you listen to me,’ said the overseer. ‘I’m from Wakefield Station yonder and I’m overdue with these rations.’

Will dismounted, fixed his horse to a tree branch with the reins, then walked up to the wagon, examined the half-buried wheels, while the two workers took the opportunity to lean on their shovels. The horses in the traces were sweating from the work of trying to haul the load out.

‘Best thing, I reckon is to unload the blasted wagon,’ said Will. ‘Them horses won’t have too much trouble draggin’ it out then.’

‘There’s five ton there,’ said the overseer. ‘We don’t have the bloody time.’

‘You will if we help out,’ said Will. He walked to the wagon and lifted one corner of the tarpaulin cover. He saw sacks of flour, sugar, tea, even some pickled meat in tins. ‘We could do with some provisions,’ he commented.

‘One sack of flour,’ said the overseer.

Will shook his head. ‘One bag fer each of us, and some grain for our nags if you’ve got it. Otherwise we pile on our horses an’ ride off.’

‘Very well then. One bag each and some feed for your horses.’ The overseer spat on his hand and they shook on the deal.

Will, Jim, Sam and ‘Albert’ worked like dogs to stack the goods on dry ground, with the cover tarp spread beneath to keep out the damp. It was hot work, and the men soon had their shirts off, sweating in the sun, though ‘Albert,’ for obvious reasons, laboured on fully clothed.

When it seemed that overseer planned to simply supervise the stacking, without lifting a finger himself, Will called out. ‘Hey sunshine, what makes you think you’ve got the right to stand there an’ watch?’

With an unhappy grumble the man joined in, while Little Blue sniffed his way around the carthorses, lifted his leg on the wheels, and patrolled the stacked goods as if it was he who was supervising.

They stacked the load high, all five ton of it, and when it was done, and the wagon empty, it didn’t take long for the horses to haul the wagon out of the bog.

With the cart free at last, they piled all the stores back on again, with the overseer snapping instructions as to exactly where this or that had to be stowed.

When the wagon rolled on, Will cracked a grin and showed the others a little stash he had made in the scrub beside the bog.  As well as the flour bags and a bushel of grain the overseer had given him, Will had five more bags of flour, plenty of sugar and tea, and enough tobacco to last them three months hidden in the grass.

Jim laughed, ‘You got nimble hands,’ he smiled. ‘I never even seen you do that.’

‘He were a rude barsted,’ said Will. ‘I would’ve taken more, if our packs could’ve carried it all.’