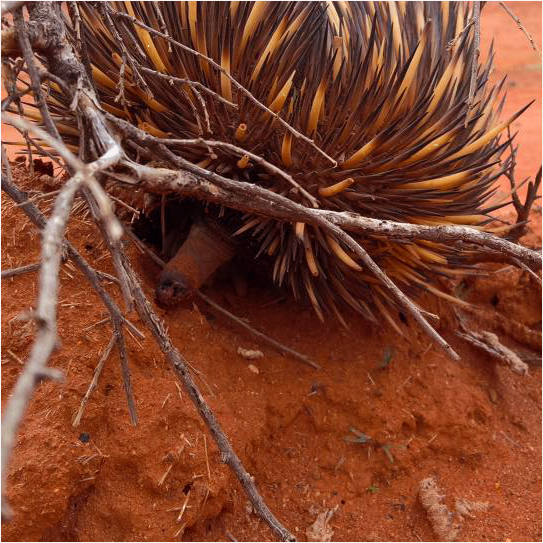 Chapter One – The Runaway Wagon

That old echidna was no fast mover, but he ambled along the stony earth with his stumpy legs moving in a hunched-over left-right rhythm, a layer of red dust powdered over the brown of his quills. He’d scented a termite mound over yonder, near where the mulga started. These termites, he could tell, were plentiful and active, and he was keen to lick them up with his long, sticky tongue.

It was late afternoon, and the burning orb of the sun was easing down towards the earth, though the ground still hoarded its warmth. The echidna had spent the day in his burrow, sleeping and dreaming of juicy termite nymphs and succulent queens. Now, finally, he was on the hunt, hungry and single-minded.

Abruptly he stopped; his snout twitching, the sensitive receptors there telling him that he had come to a road. The wagon ruts were deep in places, formed back in February when the northern wet season had dipped south from the tropics and dumped five inches of rain in a couple of days. The echidna remembered it well, for his burrow had partially filled with water. He sniffed again, and set off across the road.

The echidna was halfway there when he sensed a vibration in the ground, barely noticeable at first. He felt it in his nasal passages, in the hollow spaces of his quills, and even his claws. He had seen and heard human vehicles in the past, always at a safe distance, and was able to identify the sounds of spinning wheels and of hooves on earth.

If he’d hurried, the old echidna might have made it across the track, but that opportunity passed. Instead, he looked up and with his tiny eyes saw two horses drawing a wagonette, heading directly towards him. On the driver’s box was a wild-eyed man, and he was yelling at the horses.

Frightened now, the echidna rolled himself into a ball and gripped the earth with his claws so tightly that no jaws, hand or talon would ever lift him. He heard more yelling, and the thunder of hooves. Even in his protective ball, he was frightened. Fortunately though, it didn’t take long before the sound moved on and away down the track.

The echidna opened his eyes and lifted his head, only to see three horses with riders crouched in their saddles galloping towards him at a terrifying speed. These were, he was sure, the fastest-moving animals he had ever encountered in his slow-moving life.

Down went his head until they too had passed. After a minute or two a third rider came, leading a string of horses at a more sedate pace.

Still the echidna waited, until finally the vibrations faded into the distance. Now the old fellow eased his claws loose, lifted his head, then committed to the crossing. His mind again turned to the feast of termites that would make up his evening meal.

Almost a mile ahead by then, Will Jones was coming up to the out-of-control wagonette at a gallop, urging his gelding to approach the offside horse, while Lainey did the same on the other side. Will’s hat flew from his head in the slipstream and he hoped that Fat Sam would pick it up for him as he brought up the horses.

Will could see the reddened, terrified face of the driver, but even worse the wheel of the wagonette was wobbling like a shearer on a spree and it was obvious that it would soon part ways from the vehicle. Up ahead the track degenerated as it descended into a gibber plain of rocks, most of them red with iron as big as two clenched fists. It didn’t take a genius to predict that the out-of-control horses might lose their footing on the stones and the rickety wheel shatter or slide from the axle.

Coming up to the offside horse Will saw that foam had begun to fly from its nostrils, and that sweat coated its hide. Lainey was on the other side, also at a frantic gallop.

‘Try for the bridle,’ Will shouted.

Lainey did not answer, but he saw that she was already leaning inwards from the saddle, reaching with her left hand and holding the reins with her right, calling soothing words to the horses. ‘Come on, my darlings, slow up now.’

Will was doing the same, but with more force and no less finesse, taking a grip on the bearing rein, his own horse starting when its thigh touched the shaft. But now with a rider on either side, each with a grip on the harness, Will and Lainey exerted slowing force with the weight of their own mounts. This effort, together with Lainey’s pleaded words of comfort, was causing a gradual slackening of pace.

With enough time now to look, Will saw that that Gamilaroi Jim was parallel to the wagonette, attempting to climb from his horse onto the vehicle. As always he wore long grey dungarees and no shirt at all, the muscles standing proud on his dark skin. Jim took a grip on the wagonette hoops, climbed from his horse, and slipped down next to the driver.

Now they hit the first of the rocky ground, and the offside wheel parted ways from the wagonette. The whole vehicle sunk to one side and skidded. Jim held himself and the driver in place by dint of his strength, while Will and Lainey concentrated on slowing the horses and preventing another panic. All in all, the thing was done with some control, and finally the wagonette, and the horses that drove it, stopped in a broiling sea of dust.

For a moment or two, no one moved. Men, woman and animals alike remained still, chests heaving. It was as if they were collectively worried that a single word might panic the runaway horses all over again.

Finally, Jim and the driver of the wagonette half-fell, half-climbed out of the steeply sloping vehicle, reaching the ground and dusting themselves off.

Will looked at the driver curiously. He was full-bearded in the same shade of white as his hair, with a compact body and long limbs that made him seem spider-like.

‘Dear Gawd in Heaven,’ the driver said. ‘I swear that I can’t thank you people enough. If you hadn’t a’ come along in time the Lord alone knows what might’a happened.’

Will backed his horse a length or two, to give the man some room. ‘We were in the right place at the right time, and that’s for sure. I’m Will by the way. That’s me sister Lainey, an’ Jim were the one what jumped on board the wagon with ya.’ Fat Sam was just coming up with the packs and spare horses, also carrying Will’s lost hat and leading Jim’s horse. His eyes took in the scene with his usual calm. ‘This quiet barsted ‘ere is Sam – you can see that he’s Cantonese, but he’s one of us.’

‘Darn pleased to meet you all. My name is Scotty McCrae – part owner of Mudie Station thirty mile yonder. All this help is unexpected but welcome.’

‘Got to help each other out in the bush,’ said Will. ‘But tell us, will you, what startled the poor bloody horses in the first place?’

Scotty made a face, then spat heavily into the dust between his feet. ‘Oh it were a darn fool anteater – echidna or whatever ya they call them. I tried to swerve around, but that didn’t help. The horses didn’t like the look of him an’ went straight into a bolt.’

Will accepted the explanation. ‘Well, it’s a good thing we were follerin’ so closely behind. It’s too late to move on now, so we might as well set up camp back before the rocks start. We just passed a creek bed that should have a hole or two – we can help you get these horses to water and in the morning we’ll put that wheel back on.’

‘That’s nice of you, sir,’ said Scotty. ‘I’ve plenty of tucker, ‘an’ I can use a saucepan better than most.’ He bowed low, ‘I’d be honoured to prepare a slap-up feed for all tonight.’

In the silence that followed this promise there came a strange sound from the back of the damaged wagon. Will imagined that it might be the squeal of a rat at first, but then it came again – once, twice, then a third time. It was a yap, a bark, yet from an animal too small to deliver any depth to the sound.

‘What the hell is that?’ asked Will, but Lainey, who always beat him hollow in the curiosity stakes, was already dismounting from her horse and walking towards the rear of the wagonette.