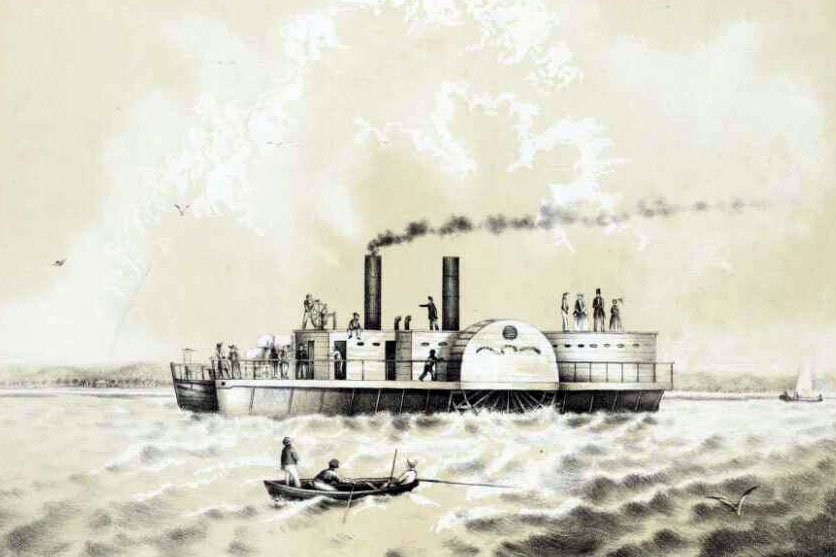 Long days followed, and Anne Finniss felt the tension on board the Lady Augusta more than most. Captain Cadell drove his crew and passengers to their limits, with the vessel barely at rest for three or four hours in the deepest hours of the morning. Anne noticed that even Arman, the smiling Madrassee deckhand, began to shuffle between his duties with his head down, and a melancholy cast to his face.

Anne’s thoughts turned often to the romantic moment with Captain Cadell on the promenade deck. This had not been repeated, and they had scarcely spoken since. Their eyes, however, had delivered many a poetic line across the deck.

When the Lady Augusta did come to rest in the middle of some dark night, the hands were too exhausted to keep watch, and Travers was one of several younger passengers who had volunteered to take this duty on, so the seamen could snatch some sleep. Anne had argued against this, but made no headway against a fourteen-year-old desperate to prove his manhood.

Nothing had happened. In fact, Travers had executed his duties with aplomb.

On the evening of the 1st of September, both passengers and crew were anxious for some respite by reaching John Chapman’s station at Paringa.

Yet, early that evening, the Lady Augusta was inadvertently steered into an anabranch that appeared to be the main channel. She steamed on into this mistaken route for more than a mile before the leadsman reported that there was no longer enough depth to continue. A turn was begun – no easy task with a barge almost as large as the paddle-steamer lashed alongside. The anabranch, moreover, had become a narrow channel, studded with drowned trees. Soon afterwards the shouted voice of Captain Cadell reached every corner of the ship and barge, dressing down the officer-of-the-watch who had made the error.

This delay meant that the jetty at Paringa did not come into sight until after nine pm, In the darkness of the riverbank nearby a limp flag waved an Irish greeting that took Anne back to her distant homeland.

With the Lady Augusta tied up to the jetty Anne joined a party to head ashore to partake of station hospitality. At the same time shore-fires were again lit, in order to illuminate the work of taking on wood that Mr Chapman’s men had cut for them. Anne and the party of dignitaries were given a sumptuous dinner, their numbers swollen with local squatters and Mr EB Scott, the sub-protector of Aborigines.

Also at the station that night was a police constable waiting in an out-building with a chained Aboriginal prisoner: one of several who had killed two white men on their way from the Darling. The other offenders had been shot trying to escape.

After dinner, before returning to the Lady Augusta, Scott took the company out to view the prisoner and his captor. ‘If you could carry him to Wentworth for trial I would be much obliged. He needs no shelter, just a shackling-point for his chains, and a little to eat.’

The prisoner was taken on board by the constable and two armed station-hands. Anne watched with fascinated horror from the promenade deck as the killer was fastened to the rail aft, while the constable sat nearby with a rifle on his lap.

‘I for one, dislike having a killer aboard,’ Mrs Irvine declared. ‘What if he escapes and goes on a rampage? I shall not feel safe in my bed – it was hardly fair of Mr Scott to make such an imposition on us.’

Anne did not reply, but she felt the same. And with the fires burning on the shore and the tramping feet of men finishing the loading the holds with timber for the ravenous fireboxes of the two great engines that drove the Lady Augusta onwards, she went to her bed, but lay awake, filled with a sense of dread.

It worried her that Travers was staying up again to take watch, especially with the constable and his prisoner on deck. Lying in her bed, with the other female passengers snoring in their bunks it was all she could do not to get up and check on him.

Hours of short naps and wakeful interludes passed, and it was still very dark when she heard the stokers back at work, then finally the engines start. The splash of the paddlewheels  and hiss of steam was almost soothing, covering all other sounds. She saw the first light of dawn filtering in, then heard some of the others getting up and dressing for breakfast.

Finally now, Anne relaxed enough to sleep, and she drifted off again. She was in a deep, comforting slumber when there was a terrible scream that carried through that boat like a knife through flesh, then the immediate stoppage of engines and the sounds of shouting.

Anne had dressed and reached the deck when they carried Captain Davidson up from the starboard engine room, screaming in agony still, his leg foreshortened and the end mashed to a bloody pulp. At first Anne worried that the prisoner had indeed gone on a rampage, but it quickly became obvious that an accident of a grievous nature had occurred.

Cadell fixed on the spectators and growled, ‘Please, everyone go up to the promenade deck and give us room to take this man to his cabin.’

There, up high above the river, Anne took Travers’s arm. His face was white, shocked at what he had seen. Louisa Younghusband was crying, sobbing against her mother’s leg

George Palmer, who had been helping in the engine room, had witnessed the accident, and now he held court on the facts of the matter. People, in general, listened to Palmer, for he was a Lieutenant Colonel himself, one of the founders of the City of Adelaide, and a comrade of Colonel Light.

Palmer smoked his pipe furiously, while his words came in staccato bursts. ‘Davidson was walking past the starboard engine …  the boat must have lurched against a snag …  for it moved a little. Davidson, lost his balance for a moment … his foot touched the eccentric wheel of the steam engine where it was grabbed and crushed to a pulp.’

Palmer had not finished. ‘No seaman would do have an accident like that unless he was tired beyond bearing; being driven by Cadell twenty-four hours of the day.’

‘Come on old chap, you can’t lay the blame for this on our Commander?’

There was no answer but for the cawing of a crow in a river red gum and the sound of Cadell’s feet on the ladder as he came up to reassure his passengers.

Later, Anne, like most of the other guests, visited briefly with the injured man in his cabin. He had been given laudanum, and looked quite peaceful. Afterwards, passing Cadell’s cabin she heard two voices inside. One was the American, John Copeland, Chief Officer of the Eureka.

‘No one else will say what needs to be said,’ came Copeland’s New York drawl. ‘This man needs urgent medical help, and we need to turn around and give it to him.’

There was a long silence, then Cadell’s voice, ‘Mister Copeland, I am the Commander of this voyage, and I will not turn back. Davidson must take his chances. There is a doctor at Wentworth, on the Darling, and we will proceed there with all possible speed.’

‘From all reports Doctor Fletcher at Wentworth is long-retired – a simple landholder now. There is no hospital or infirmary there. For the sake of this man’s health we should turn back.’

Cadell’s voice cracked like a whip. ‘We will not turn back, and you must say no more on the subject.’

Only silence followed, and Anne walked away, taking care that her feet made no sound.

Image is of the Lady Augusta & Eureka, Capt. Cadell’s first vessels on the Murray. Lithograph by J.H. Adamson