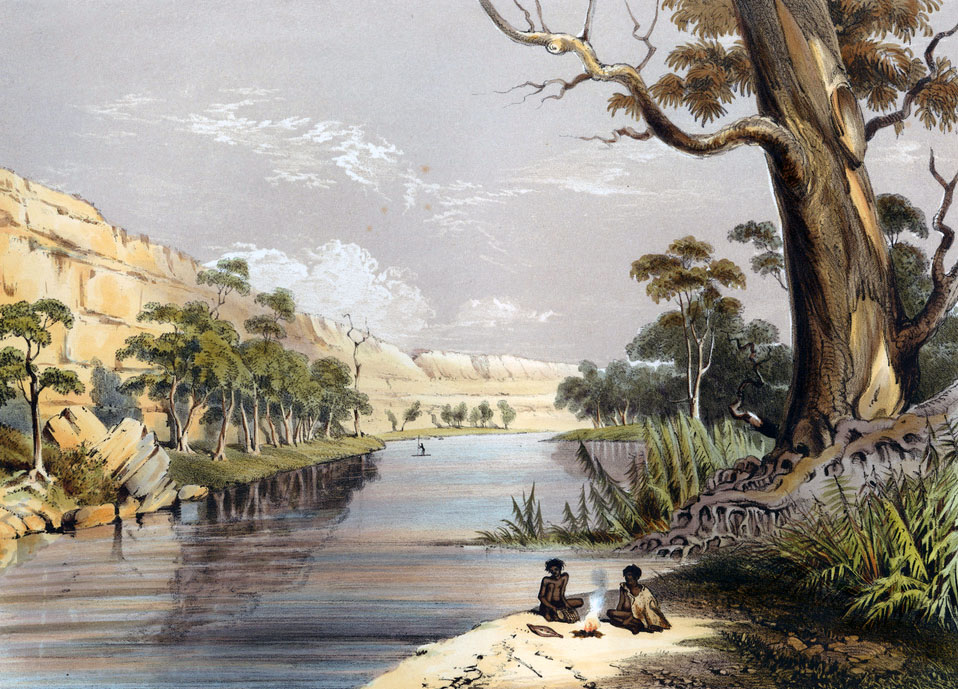 Napier, the Lady Augusta’s Chief Engineer, requests five hours of stopped engines to perform maintenance. I promise him three, and we set two anchors in the river mud off Moorundie and lie straight in the current. During this down-time, I send our guests ashore, cowering under umbrellas because of the drizzling rain.

This wasted time irks me, for I desire with all my heart to set off on those serpentine river bends, and on into the increasingly arid valley that contains the stream. My passion for catching and overtaking William Randell is consuming me. A disease for which only grinding the upstarts into second place is the cure.

It is a relief to see the passengers leave my sight and head ashore, out of my way for a period. I am happy to see them go. How tired I am of them all! Governor Young, and the dignitaries Kinloch, Grainger, Palmer and the rest. The wives and daughters are no better. They expected a picnic cruise in first class conditions, but their quarters are tight, the food is scarcely Ritz-standard and they are growing weary of the journey, despite having barely started. I am tired of their veiled complaints about the food, the sanitary arrangements, night travel, and constant requests to visit with station and farm owners along the banks, leading to interminable cups of tea in drawing rooms. I am even tired of Mrs. Anne Finniss and her mixed signals.

Now, at least, I have some respite, and I soon have the crew busy cleaning, coiling ropes and polishing brass work. I see that William Gylmore, the cook, has opened negotiations with some river blacks, who come alongside in their mongue watercraft, trading sticks of plug tobacco for fat cod.

The engine maintenance is a success, and I would have proceeded up the river again that instant but when the dignitaries return, they bring a man and two women of the native Moorundie people across in the skiff with them, treating him with an indulgent patronage. The man, Tenbury by name, is enormously tall, dark as night, with the bearing of a monarch, scarred across his chest and upper arms, his skin damp from the rain and his eyes dark incantations set deep in his skull.

Tenbury has apparently and visibly shaved every hair from his body and scalp with a stone blade, and Mason, who is known to him, explains that he is mourning the loss of a son, which is why he is in such a state.

Our impromptu guest, however, needs no interpreter. As well as his own Meru dialect, he speaks English with a wide vocabulary. He appears to understand the questions of comments of the passengers who, including the women, surround Tenbury and his two wives, all dressed regally in animal furs, and ask him inanities such as, ‘How does one cook an entire wallaby?’ or ‘How did your people live without hospitals?’

At the conclusion of this salon of poor taste Tenbury pulls Mason, the Protector of Aborigines, who seemed to be known to him, close and whispers something.

‘Tenbury would like to sing us a blessing for our journey,’ Mason announces.

‘A fabulous idea,’ enjoins Mrs Younghusband. She turns, ‘Louis, Lily, Sarah, come listen to Mr Tenbury’s song.’ Others gather too: Travers and his mother, and I feel the instant stress of her presence. Those of the crew who are not immediately engaged in work came also.

Tenbury draws a deep breath, then throws back his head, doing something strange with his eyes so that the whites take the place of his pupils. He begins to sing, low and dramatically. I know from the start that he is not singing us a gentle lullaby, and I can see from Sub-Protector Mason’s face that he knows this too.

I know a curse when I hear one, and Tenbury’s curse springs from deep down in his guts, and when his eyes return to their normal state the pupils never leave mine. When Mason, as if reading the anger in my eyes tries to stop the song short the ladies titter, but the dark man finishes with a glare of hatred so intense that even I stagger from the force of it.

I recover myself enough to say. ‘We thank you for the blessing, but now we must be on our way.’ I turn to the captain of the Lady Augusta. ‘Clear the vessel for departure, Mr Davidson. We leave in ten minutes.’

And after two of the seamen had escorted Tenbury to the skiff, preparatory to rowing him away, Mrs Irvine said, ‘What happened to the poor man’s son?’

Mason did not answer, but walked away down the deck as if he had not heard.

And in the coming days, that encounter takes the swagger from my stride and causes me to feel pessimistic when I should be hopeful. I am angry that my passengers brought Tenbury on board for their amusement, heedless of the dangers that lurk in him.

Steaming on up the river, the next evening we load firewood, labouring well into the night, igniting a bonfire to light the loading parties as they carry armloads of fuel on board, and our guests, always anxious for diversion, make the bonfire their own.

I watch the work proceed, alone on the promenade deck, leaning against the rail when Anne Finniss ascends the ladder, taking her place beside me. The firelight touches the proud features of her face and I know that I have never seen a more beautiful woman.

‘You do not seem to be yourself, these last few days,’ she says. ‘Is there a problem?’

‘None whatsoever. Only the responsibilities of command. They can wear a man down, sometimes.’

To my vast surprise, the Colonial Secretary’s lawful wedded wife slips one hand onto my back where it burns like fire. ‘I’ve watched the way you run the ship, and I admire you very much.’

‘Where is Travers?’ I ask, somewhat lamely.

Anne chuckles, her hand still resting in the small of my back. ‘At the fire of course, entertaining Lillie. Don’t you worry, Mrs Irvine is watching them.’

For a moment I simply let the gentle Irish lilt of her accent echo in my mind as if it were a sealed cave that might trap the cadence of her voice forever.

Such is that moment of rapture that I do not hear the sound of boots on the ladder, only a subtle cough behind us and I turn to see Davidson approach. Anne drops her arm like a gun and turns away without a word.