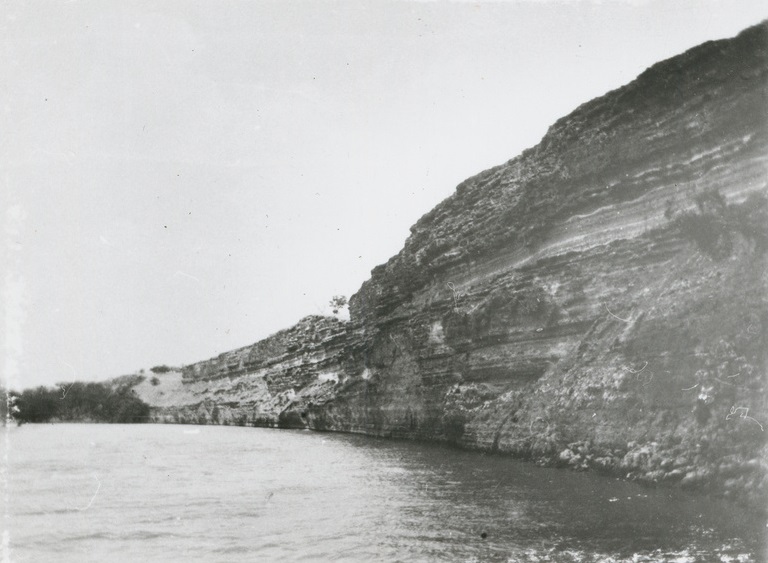 ‘What on earth are ee goin’ to do with that thing?’

Elliot Randell was leaning on the side of the deck, watching while William ran a whetstone along the blade of a sword – a fearsome weapon some three feet long, with a two-handed hilt, and filigree on the guard.

‘Ar,’ William replied, hefting the weapon, ‘I’ll use it to defend the Mary Ann from all manner of dangers.’ He was quite proud of the sword – given to him by a friend – no doubt a family heirloom that had been hosting spider webs in a corner for years.

One of the two deckhands they had hired was just sixteen years, green and raw, straight off the farm, and he happened around the corner of the main cabin, just in time to hear his captain’s declaration.

‘D-d-dangers?’ the lad stammered. ‘What kind do you mean?’

William stood up and pointed the weapon towards the north. ‘Oh, proper terrible dangers,’ he said, with a twinkle in his eye. ‘River pirates for a start! And who knows? Armed colonies of Jacobite revolutionaries perhaps.’

‘Not at all, but more than that, there’ll be hordes of painted warriors all competing to cut our throats. First the Meru, then the Danggali, the Latje Latje, the Kureinji—’ He lowered the point to the deck. ‘Oh I’d reckon that this sword will’ve proved its worth by the time us wins our way back south.’

The young deckhand disappeared aft, leaving William chuckling to himself.

It was March the twenty-fourth, 1853, and the Randell brothers had packed the last of their trade goods into the hold and prepared for a morning departure. William was feeling cocky, but he put down the sword and looked at Elliot seriously.

‘I can’t wait to finally get away. Us has got the jump on that damned Captain Cadell, by a couple of months at least. He may have launched his Lady Augusta, but the engines aren’t in her yet, and then he’s got to bring her all the way around by sea, then cross the bar. Us’ll not only get to the Darling Junction before him, but will sell every damn bag of flour in our holds and be back here before he steams into Goolwa.’

‘Unless the boiler does blow up on us,’ observed Elliot drily. Keeping that leaking iron vessel in one piece remained his primary concern.

‘There’s that,’ admitted William. A moment later there was a terrific splash, and the sound of a man churning through the water towards the riverbank. It was the young deckhand, all his belongings in a hastily gathered bundle, heading for the shore at a rate of knots.

‘Well done,’ called Tom from the wheelhouse. ‘You just scared our new stoker off with that damned sword of yours.’

William looked down at the weapon then shrugged. ‘Good Christ forgive me. I were only joking.’

As planned, Elliot rose in the dark to heat the boiler, and they cast off the lines at dawn. The river was full of promise over those early miles with a light mist rising from the surface. They made a good eight knots at first, and the deck was a cheerful place, all smiles and jokes, with the sun on the water and the hinterland beckoning.

By the time they had reached the village of Nildottie, however, there were worrying signs – mud bars across half of the river, and shallow treacherous channels that required painstaking attention to navigate.

‘It’s damn shallow,’ said Elliot, but by evening they had passed through the ‘Big Bend,’ an important milestone, and a place of dramatic scenery, where limestone cliffs, pockmarked with caves, often lined the great river’s banks.

William declared that reaching the Big Bend was worthy of issuing a glass of beer all round, a new institution that was always accompanied with a muttered, ‘Ar there everyone … remember not to tell Father.’ When the remaining deckhand asked if he might have another measure, they stared at him as if he were a drunkard. Beer to them was a special treat, not a staple.

On the second and third days the river became ever shallower. They passed Morgan at a crawl, and there they pulled into the bank and unloaded several tons of supplies, caching them on the riverbank. This helped, for a time.

Finally, at Penn’s Reach,  there was no way through. They charged the shallows with the engine thumping, and the paddlewheels throwing spray, but they made no headway. They waded ahead for hundreds of yards through water never deeper than their knees. The Mary Ann drew three feet, even after removing much of her burden.

By dusk of that evening William sat in the bow with his legs hanging over the edge, his two brothers beside him. ‘I’m afraid us has no choice but to turn back,’ he said, ‘an’ wait for a fresh in the river. It just weren’t fated to be this time.’

‘We’ll have to come back when she rises,’ agreed Tom reluctantly.

William thought of Cadell with all his power and official backing, being so close on their heels. He could have cried with frustration. After all their work, and overcoming great difficulties, this seemed like a cruel trick – to have set out not only at the worst time of year, but in a period of drought into the bargain.

Later, back in Nao-No, William and his brothers kept the Mary Ann’s hold full of supplies and played a waiting game.

Each morning William walked down to the water to examine the marker he had installed to monitor river levels. Every morning he felt a hollow sense of disappointment fill his chest. Even a ride up to Gumeracha, an afternoon spent walking with Bessie and a couple of nights at Kenton Park, the family home, failed to raise his spirits.

Months passed. April, May, June, and July. The river continued to drop. It was impassable. The dream that had seemed so close, now looked like an impossibility.

Don’t forget to check out our Australian books at ozbookstore.com