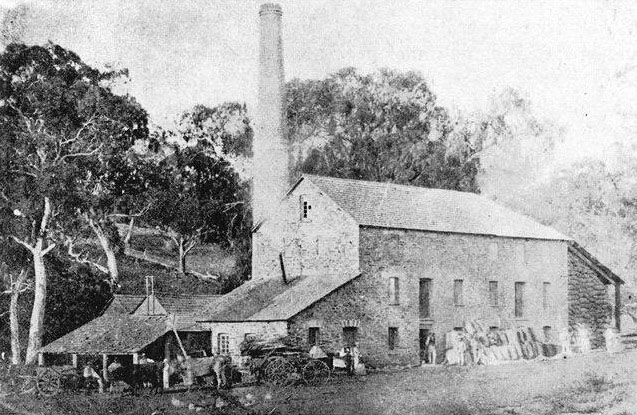 In 1852 Gumeracha occupied a wedge-shaped block between the upper Torrens and its tributary Kenton Creek. It was scarcely a town, barely even a village, just a scratch on the grasslands of the Adelaide Hills, that so-often tinder-dry vastness with its deep gullies and rounded hills, that draw the eye on into the distance: where banksias grow in twisted stands, and golden wattle trees signal the coming of spring with the purest of yellow blooms.

This tiny settlement had a store, several farms, and the Randell family’s stone flour mill. It stood three storeys high, with wings at each end, one for the storage of wheat, the other a mill office. The millstone inside was powered by a stationary steam engine, and sweating stokers fed the firebox with red-gum blocks while dark smoke poured from the stack. Wagonloads of wheat arrived, poured by the hands of labourers into the mill hoppers. Other teams hauled sacks of flour, away down the Adelaide Road.

Nearby, on the creek bank, stood a shed of bush poles, clad with branches to keep out the sun. Inside was a saw pit – six feet deep and three feet wide – lined with walls of loose river stone. Above the pit a heavy river red gum log had been chocked into place. More logs were piled nearby; barked and trimmed, still with the marks of chains where the bullock team had snigged them up. Piles of scantlings lay on the ground, being slowly claimed by the dust.

Two men, stripped of their shirts, worked the pit saw, with its handles perpendicular to the blade. One stood in the pit and one on the log, their biceps and shoulders swelling with the effort of driving the blade. The saw cut only on the down stroke, which allowed the man below to use his weight to assist, but the pit was a hell of heat and falling sawdust, reeking of fresh-cut timber, while hands blistered and tempers frayed. The rounds were first taken off the log, leaving a square flitch, at which time boards could be taken off at the desired thickness.

The men who weren’t sawing were busy with chisels and hand saws, cutting out the mortises that would one day help lock these pieces together into a boat.

‘Halt there,’ cried William Randell. ‘You’re off the line boys.’ William was the oldest brother, prime instigator of this venture, and a stickler for accuracy.

‘Scarcely a few thou,’ complained Tom, but still he backed up the blade an inch or two and tried again.

When it started to grow dark, the men packed up, and William was surprised but pleased when a slim figure appeared, sitting on one of the stacked eight-inch beams, swinging her sixteen-year-old legs, saying nothing, but humming a popular tune as she watched.

Elliot, Tom, and the two carpenters walked home while William finished the last of the tidying up. When this was done he sidled across to the girl, wiping his hands on a rag.

‘Hello there Bessie, are you back from school?’

Bessie, more properly known as Elizabeth Ann Nickels, beamed, ‘Yes, Ebenezer brought me home today. Two whole weeks of freedom – can’t complain about that, can I?’ She came to her feet easily and looked around. ‘You’ve made progress, in these last months,’ she said, and her gaze returned to William. He was twelve years her senior, and she worshipped him. Good looks and an irrepressible character ran in the Randells like gold threads through cloth.

‘That we have. In two weeks we’ll start carting all the pieces down to the Murray, and put her together.’

William was not especially tall, and he was long in the torso and short in the legs. He had never once in his life been able to touch his toes, but was a strong and nimble man nevertheless. He fumbled in his pockets for a tortoiseshell snuff box, and took a pinch with long, artist’s fingers.

‘Shall I walk you home?’ asked Bessie.

‘I might look in on the mill as we pass, but we can walk together some of the way, if you want to.’

As they walked Bessie skipped ahead sideways so she could see his face. ‘Miss Rowland told me to ask after you,’ she said impishly.

‘Oh did she?’ William grimaced. He and Mary Rowland, the younger of two school mistresses at the Rundle Street Girls’ School in Adelaide, had gone perilously close to getting engaged a couple of years earlier. In truth he had viewed the situation with alarm, aware that his natural friendly demeanour had been mistaken for romantic interest.

Bessie’s eyes danced. ‘I rather think that she’s still sweet on you.’

William fumbled for a way of changing the subject. ‘And did you do well in your examinations?’

‘Well enough to keep Father happy at least,’ she smiled. ‘Oh it’s so tedious, William – apart from English and History – I rather like those. I want to finish with school and start living.’

‘I was the same,’ he admitted. ‘But you’ll be finished soon enough.’

Nearing the mill, William slowed his pace and stopped. ‘I’d better check on things inside. Perhaps it’s best if you get on home.’

‘Of course. Will you be at church tomorrow?’

‘You can bet on it,’ he smiled. And when he reached the side door of the mill he paused and turned back to watch Bessie run up the track towards the Nickels’ family home. Sunset turned the yellow grass to rich gold, and her hair was the same colour. Bessie was great company, and she brought sunshine and happiness wherever she went.

William’s attention was quickly taken as he approached the blacksmith’s shop outside the mill, with its glow of fire from the forge, a boiler taking shape from iron and the muscular form of the blacksmith hammering away. This boiler would one day build steam for William’s river boat, and he walked across to consult with the blacksmith.

The rest of the engine was being manufactured in Hindmarsh by German-born engineer Mr Claus Gehlkin. It would be an old-style beam engine with a ten-inch cylinder, and a projected output of around seven horsepower. The intention was that the engine would be economical – William did not intend to spend all his time cutting wood on the riverbank to feed the firebox.

William closed his eyes for a moment, daydreaming of what his paddle-steamer would be like when she came together. He pictured himself in the wheelhouse, navigating the bends and bars of the great Murray River.

It was strange, but whenever he had that vision, Bessie was always beside him.