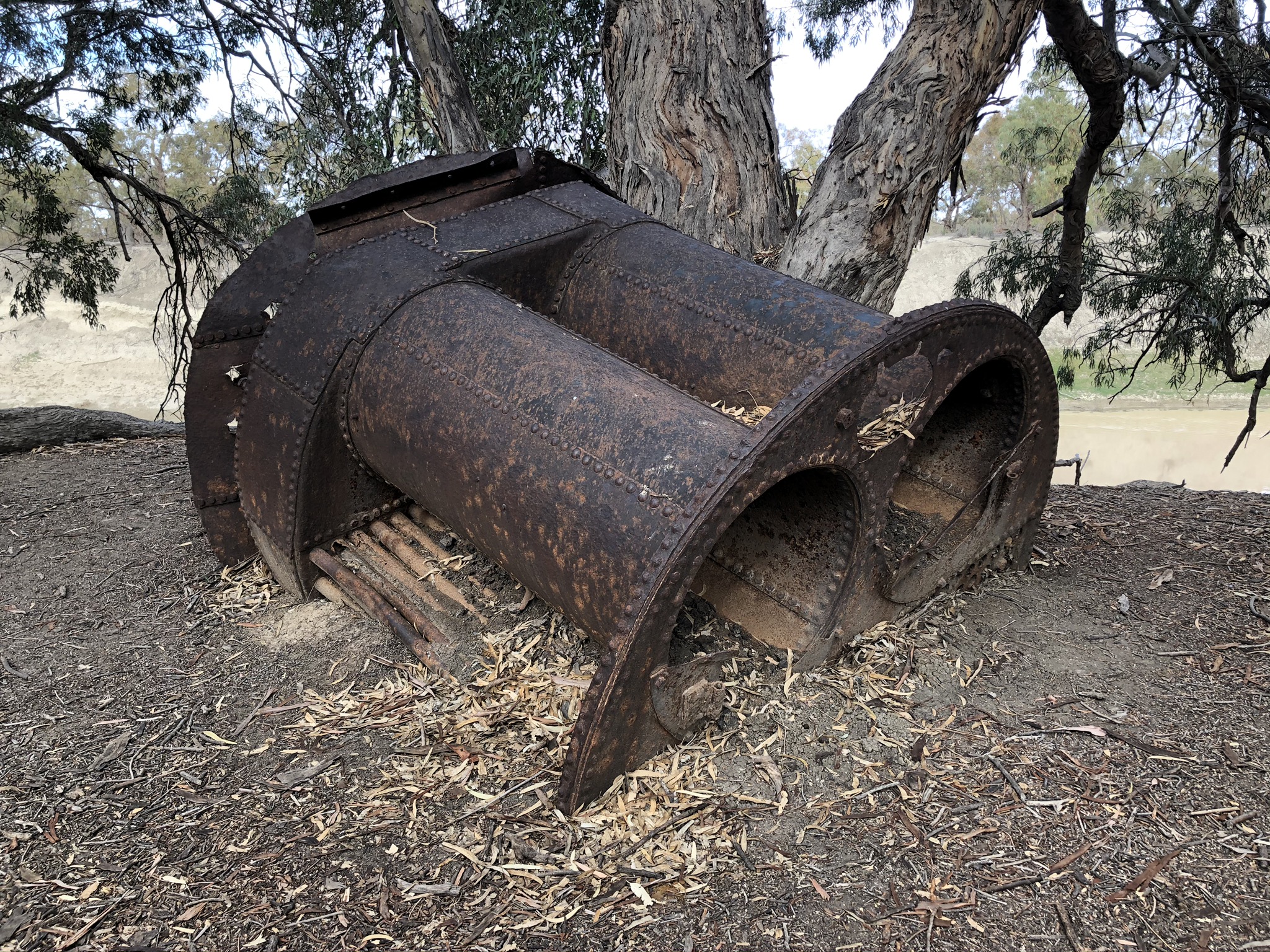 ( Twin fireboxes, once attached to the Providence’s boiler, still lie on the banks of the Darling near Kinchega Station. )

The year was 1872, and for twelve months the 78-foot-long wooden paddle steamer Providence, under the leadership of Captain John Davis, sat on a waterhole north of Menindee waiting for the Darling River to rise. Drought had tightened its grip across western NSW and dried the river to a series of pools. Not even a rowboat could get through.

Finally, rain fell upriver, far away on the Balonne, the Macintyre, the Gwydir and the Namoi. As the river rose the Providence and her crew ambled downstream again, stopping at Menindee to load 200 wool bales and for a much-needed night on the town. The journey was paused for a night of riotous drinking and celebration at Maiden’s Hotel.

The next morning, the crew, much the worse for wear, stoked up the firebox again, but neglected to check that the boiler had water. Around ten miles downstream, on a bend near Kinchega Station, the pressure reached catastrophic levels.

To say that the boiler exploded is an understatement. It tore the ship apart in a storm of flying metal fragments. The captain, engineer and stoker were all killed. The cook was blown into a treetop, and survived long enough to be rescued before dying of his injuries. Another young man had both legs broken and though Menindee’s Dr Cotter tried desperately to save him, he also died. Henry Trevorah, a miner from Adelaide who had joined the boat at Menindee, was one of the few survivors.

A first-hand account, posted by a crew member of another paddle steamer from Kinchega Station in the days after the tragedy, gave the following account:

“We had been wooding last night between 6 and 7 o’clock, and had just got under steam again when the captain called my attention to the large quantities of painted boards that were floating down, remarking that he supposed a collision had taken place between two of the boats. The Ariel was just ahead of us, and the Providence was expected down. We picked up a cabin window, a door, and a large quantity of boards, also a swag containing some clothing, a little money, and a pin. We. steamed on for about a couple of hours, and when we arrived at (Kinchega Station), were at once greeted with the shocking intelligence that the boiler of the Providence had burst and blown the vessel to pieces.

“Four of the hands on board were missing, while four others were saved — one, however, with a splintered leg and a gash in his arm, from which, the doctor is doubtful whether he will recover. This morning after breakfast we walked up to the scene of the disaster, about a mile from the station. The scene you must imagine, for I cannot describe. The banks were strewn with boards and debris of all kinds; while high up in the neighbouring trees were lodged pieces of timber, bedding and rugs, firewood, etc. A bag of flour was thrown over the tops of trees, and landed about 70 yards from the bank of the river, while a sledge hammer and several heavy pieces of casting were carried to an incredible distance. The wreck is lying in the middle of the river with her stern down stream. The appearance she presents is of being broken in two, the after part lying on top of the bow, one portion of the fore part being visible.”