To Hell with Hall’s Creek

by Larrikin (With help from Fitz and Sandy Myrtle)

I’ve been thrown by horse, and gored by bull,

An’ trampled by the same,

I’ve been bit by dogs and old Joe Blake,

Been rocked by storm and rain.

I’ve worn out boots, on the desert routes,

An’ near drownded in the Wet,

But this last twelve month I found me match,

The toughest bastard yet.

Yes, I met my match in Hall’s Creek town,

The bane of young and old,

The worstest cur I ever saw,

My mates and I, we dug a shaft,

We dug half way to hell,

Some other folks from across the sea,

It don’t seem fair, but that’s just it,

we rode away and left,

Not knowing that our futures sat,

a little deeper down that cleft.

I’m going back, to cattle work,

Out on the furthest runs,

and leave this place to memory,

and other fools their ruin.

I’ll do a hard day’s work, for stockman’s pay,

And to hell with old Hall’s Creek.

Tom rode up to the new claim, and he could see in a moment that news of the Chinese strike had reached the camp. Most of the gang were sitting, drinking rum around smoky fires. And how different was a day time rum-drinker’s fire from a night time one!

Carmody and Tommy the Rag were packing the last of their things, the hostility against them plain to see. All-in-all the mood was ugly, and only the sight of Tom, in Afghan clothes, riding a very tired horse into the camp, distracted them.

‘What’s this?’ shouted Sandy Myrtle, lumbering to his feet. ‘Who’s so bad mannered as to ride up without so much as a cooee?’

Tom swung down from his horse, then swept the turban from his head. ‘It’s Tom Nugent, and I thought I’d find the Ragged Thirteen here, not a bunch of beaten-down lags.’

The announcement buzzed through the air, and they all came around. Tom could scarcely stop chuckling as the kid from Borroloola hugged him around the legs and every one of the Thirteen wanted to shake his hand and clap him on the back. Someone took the gelding away to water and graze, and someone else brought a pannikin of rum. Jake and the girls arrived on the scene, and Tom thought that it was just like a birthday celebration.

‘Oh it’s us, alright,’ said Sandy at last. ‘But you’re here just in time for the break-up.’

‘Break-up? Why would that be?’

‘Haven’t you heard what the Celestials found in our old claim?’ spat Fitz. ‘Tommy here, an’ Carmody, were supposed to stay there and look after the place.’

‘I’ve heard alright, but why did you move here, if there weren’t any gold?’

‘Oh there was, at first, but it ran out fast enough – there’s a few pounds in the bank to account for your share.’

Tom drank his rum down, then insisted on a tour of the claims. Jack Woods showed him how the reef gold had lain at the top of the rise, weathered and lying exposed.

Tom walked around the claim. ‘Have you dug underneath at all?’

‘Not much. No one was keen. We’ve mainly been panning the gullies these last few weeks.

‘Well listen. There were two leaders at our old claim, with the poorest one on top. What if there’s another one underneath, right here, just like the Chinese found.’

‘That’s not what I mean, let’s strip it off with shovels and barrows.’

Jake cut in. ‘Ned Shaw has a horse drawn bucket. It’d be perfect for that.’

Carmody had his arms crossed in front of his chest. ‘Sorry Tom, but I’m outta here.’

Even Jack Woods shook his head. ‘No one has the stomach for digging no more, Tom. There’s news of colour down in the Pilbara. I’m going to head that way.’

‘What about you, Sandy?’

‘I’ll probably head back to the Centre. I heard whispers of a strike at Arltunga. Might head that way.’

Tom was thinking to himself. To entice Emily away from her school room he needed land. He had to make something of himself. He knew of a block near the Overland Telegraph Line that could be had for a good price, but a few pounds was not enough. He needed a nest egg.

‘Give my idea a try,’ cried Tom. ‘Let’s dig for two more weeks, that’s all. If it doesn’t work out, then we just shake hands and ride our separate ways. Can we really afford to ride away from a second claim without knowing what’s underneath?’

There was a dead silence at first, then Sandy was the first to speak. ‘I s’pose not.’

The others grumbled in the affirmative.

‘Alright, then,’ said Tom. ‘Let’s drink today and be proud of how it feels to be the Ragged Thirteen. Tomorrow we start work.’ He paused. ‘And keep an eye out for those damned traps.’ He placed the turban back on his head. ‘If anyone asks, I’m just a poor Afghan cameleer.’ 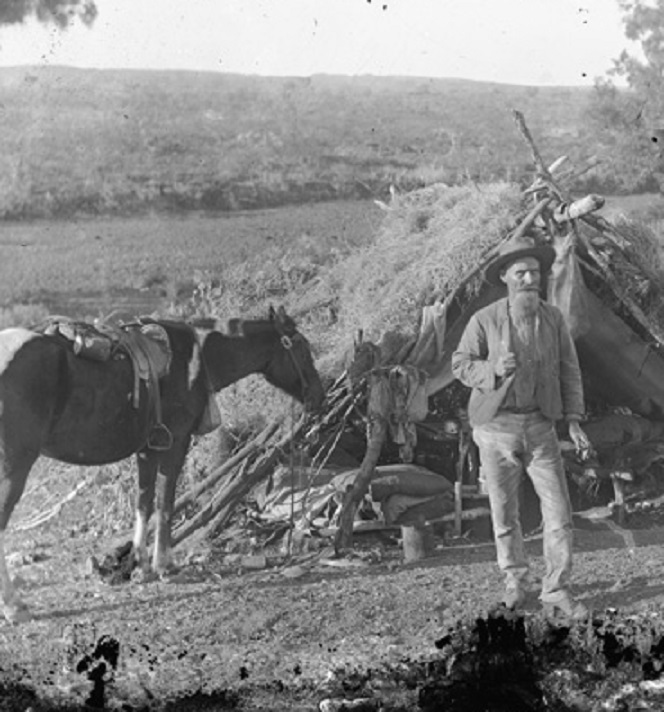 Prospector in front of his hut. State Library of Western Australia

Scotty had been taking the occasional wild desert rose to Red Jack for months. Yet, he did not have time to ride out and search for them every day. Now that Tom was back, if there was even a breath of breeze the men worked right through. When Scotty’s shift came around he laboured ‘til dark without complaint.

Given a spare hour or two, however, he went searching for flowers. Finding them was getting harder, for the season was so dry that even beauty had trouble finding sustenance. No matter how dowdy or dried up the bloom, however, he still took it to Red Jack, and each time her face would light for those few magic moments. And Scotty would sit on the top rail and watch her work the horses.

One the third day after Tom came back, Scotty found a special flower near a bend in the Black Elvire. There was a tiny soak between two sides of a hard wall of rock, dampening the sandy soil. Ferns and tiny flowers grew in profusion. Amongst them was just one desert rose, almost perfect.

Red Jack lifted the flower to her nose and her face lit up. Scotty felt his heart thump like hoofbeats in his chest. It was a special moment. The sun was just clipping the horizon behind the yards, and her hair glowed like fire. Mephistopheles was in the yards, a great black shape, muscled and graceful. Other horses waited also, ready to be broken by one of the best horse breakers the bush had ever seen.

‘I thought I should tell you,’ said Red Jack, ‘that I’m moving on soon. As soon as Larrikin’s mare drops those twins, and that should be soon, I’ll be ready.’

‘We’ll be finishing up here shortly as well.’ Scotty said. He hesitated for a moment, then spilled his heart. ‘When you go, I wish tae go with you.’

Red Jack placed a hand on either side of Scotty’s chin and kissed him delicately on the lips.

As she walked away from him, across the dusty yards, his vision blurred with pain. There had to be some way to change her mind.