Within a mile, Tom knew that he was never going to outpace the police patrol. He wished he’d thought to steal a better horse before he left Wyndham, but from here there’d be no opportunity to upgrade before Turkey Creek.

His only chance now was to leave the road, and try to throw the trackers off the scent with a cross-country ride. Yet, he needed a creek to divert into, or a shelf of flat rock next to the track. Otherwise the trackers would clearly see his exit point. They would almost certainly have already followed his spoor to the abandoned night-camp of just half an hour earlier, for a good moon had risen.

Riding slowly now suited Tom’s purpose of looking for an escape route. Even a fallen tree would help, but the side of the track remained featureless: just kerosene grass, stones and dry acacias. The police could only be a short distance behind now, and Tom knew that they would not stop while there was light to see.

There had been few times in Tom’s life when he had doubted himself, but now he began to wonder if he would soon feel manacles on his wrists and ankles. That he’d be thrown aboard a steamer, across the Gulf to Palmerston, with Alf Searcy crowing like a cock rooster over him.

Tom wished that he was back in Wyndham, taking Miss Emily Byrne out for supper, settling into the pub dining room with a good steak. It was all Alf Searcy’s fault, that arrogant, jumped-up man.

Tom was filled with a building sense of indignation, when he saw a series of uncommonly tall rocks just off the track to the left. This was strange because, for one thing, he couldn’t remember having ever seen them before. It also seemed that the rocks were lit with flickering light from a campfire.

With no real weapon to draw, he rode on, getting closer, peering at the scene. He still hadn’t quite worked out what was going on when one of the rocks moved. Even more incredibly, the lower portion of it proved to have four legs. A long neck extended as if pulled by strings from a puppeteer, and the thing made a noise that broke the silence like thunder.

It was just one of several camels, Tom realised, aware that his pulse rate had gone nuts. Next he heard a gentle voice, not in English, but in the Persian tongue of the Afghan cameleers.

Esau stood up from the fire. Behind him stood a tent of hides. His voice was as slow and smooth as silk as he addressed Tom with a military rank, as always, in deference to his leadership of the Thirteen. ‘Captain Nugent. What are you doing here, and why such a hurry?’

Tom dismounted and led his horse over to the Afghan’s camp. ‘Jesus, you’re a sight for sore eyes. I’ve got the wallopers in hot pursuit, and this gelding has no stamina. He’s the weirdest thing – steps high like he’s on show, and breaks out in a cold sweat when you push him.’

‘How distant are the police?’ asked Esau.

‘Maybe just a mile or two, and I get the feeling they’re not planning on throwing their swags out any time soon.’

Esau scratched his long beard in contemplation for a moment, then, ‘Captain Nugent. If you don’t mind, please unsaddle that horse and chase him off. If you please, I’ll drive my camels up and down over the track to wipe your trail.’ The Afghan walked to one of the enormous camel packs, now leaning against a small boab, rummaged through and removed a clean set of clothes. ‘Wear these, and we’ll pack away your saddle and the things you have on.’

After chasing off the horse, hiding his gear and dressing in pantaloons, tunic, robe and turban, Tom scarcely had time to smoke a pipe at the fireside before they heard the thunder of hooves. The police party came up, slowing to a walk and riding directly into the camp. Only the trackers held back, nosing around on the road for sign.

‘Just a couple of Afghans,’ complained one of the policemen.

‘Hey, you two ‘Ghans,’ shouted another. ‘Stand up straight when the law of the land rides into your camp.’

Tom, looking through the folds of cloth that partially covered his face, recognised Alf Searcy. He and Esau both did as they were told.

‘Have you two seen a white man ride past?’ asked Searcy.

‘Yessah,’ said Esau. ‘If you please sah, I saw one white man ride past. In a big hurry, too. Just a little while ago.’

‘What’s wrong with your friend? Can’t he talk?’

‘Salaam, salaam,’ said Tom, keeping his face pointed low, and facing away from the moon.

‘Right then,’ said Searcy, ‘we’ll get on the road after our man.’ He wheeled his horse and applied his spurs with a loud and showy shout of ‘Yah.’ The others followed, and the sound of horses at the canter receded south towards Hall’s Creek.

Tom and Esau laughed together so hard they almost fell over.

‘Thanks mate,’ Tom said. ‘If it wasn’t for you I’d probably be taking off cross country, and on that poor neddy I wouldn’t have lasted a mile before those trackers had me.’ Like most rogue bushmen, he wasn’t overly concerned about the white police, but trackers were another matter.

Tom slept with camel smell strong in his nostrils, and the next morning, after a good breakfast, he helped Esau load and balance the packs. When this was done, the Afghan ordered two camels to kneel with a mysterious command.

Tom felt himself swaying as the camel rose, finding the sheer height uncomfortable. Yet, within a mile or two he was enjoying the ride. Esau smiled in approval.

Strangely, however, as they moved at a good clip towards the Denham River, a dusty brown shape emerged from the scrub and began to follow them at a distance of two chains or so.

And for the next three days, all the way to Hall’s Creek, the gelding stuck to them like honey, coming up close and staying with the camels at their night camps on the Denham and the Bow.

‘I’m starting to like that crazy horse,’ said Tom. ‘He’s not much to ride any distance, but he never gives up.’

The only anxious moment was near Turkey Creek, when Searcy and his patrol came riding back the other way, obviously drawing a blank in Hall’s Creek in their search for Tom. They reined in alongside the camels.

‘Hey you,’ shouted Searcy. ‘Any sign of that white man you saw riding past the other night?’

The police party would have ridden on past, but then they spotted the gelding plodding along in the rear.

‘Hey! That horse, where did he come from?’

Esau did not bat an eyelid. ‘I don’t know sah, he started following us yesterday.’

There was much examination of brands and discussion between the constabulary. Soon forgotten, Tom and Esau rode on. Within an hour, then gelding appeared behind them, taking his place up behind the last of the camels. 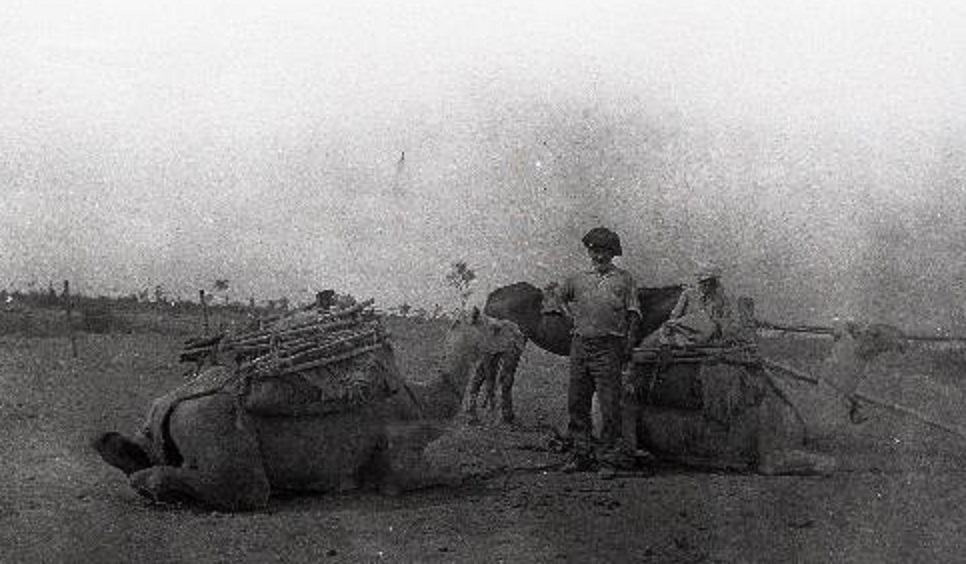 Esau and Tom parted just before Hall’s Creek. Saddling up the gelding, and packing his own clothes back into his swag, Tom remained in the Afghan’s robes so as to appear incognito around the town.

‘I’ll get them back to you shortly, and I can’t ever thank you enough.’

‘My pleasure, Captain Nugent. It was the least a friend could do.’

Unwilling to ride, for an Afghan on a horse would have been an unusual sight, Tom led the gelding through the outer diggings, avoiding stores and grog shanties. Esau had told him of how the rest of the Thirteen, along with Jake and the girls, had moved to a new claim out of town, but he still wanted to see the old place.

When he finally trudged into Rosie’s Flat, he expected the mine to be busy with industrious Chinese, like most of their claims. He did find the place alive with pig-tailed diggers, but few seemed to be working. Most were celebrating, singing and dancing. Even more strangely, there were white guards standing around with rifles. Tom guessed they had been hired to protect the claim, and that meant only one thing.

Tom sidled up to one of these guards. ‘What’s going on here?’ he asked.

The man looked at him sideways. ‘You speak well for a ‘Ghan.’

‘Yeah, I guess I do. But what are these Celestials so worked up about?’ Tom felt a lump in his throat. He almost didn’t want to know. ‘Why are they celebratin’?’

‘They just stumbled on a “jeweller’s shop” down that shaft. They’ve hired us to stop anyone who might want a slice of it.’

Tom swallowed, staring across at the shaft that he had started with his own hands and given so much in sweat and fingernails to deepen. A ‘jewellers shop’ was the diggers’ name for a gold reef that has widened into a hollow filled with slugs of solid gold.

‘Jesus,’ Tom breathed. ‘How many ounces?’

‘They dunno really. Not yet, but they reckon maybe three or four hundred.’

Tom stared, then laughed a little in the back of his throat. ‘How did they find it?’

‘They reckon there was two reefs, one below the other. The Ragged Thirteen was working the top one: a real thin leader, barely worth the trouble. The Chinese dug the shaft deeper and found a second reef. The bottom one is much richer.’

Tom had nothing more to say. Feeling hollow in the chest, he turned away. As soon as he was out of sight, he mounted the gelding. Esau had given him directions to the new claim and, if the gelding felt rested enough for the ride, he hoped to be there by midday.