The next afternoon, back at the camp in the gully north of the town, the Thirteen mused over the problem of legally registering the claims. Most had pipes between their lips, while a rum bottle made a slow journey from one hand to the next.

‘Why not register the claims in Scotty’s name, or me own?’ asked Bob Anderson. ‘The traps doan ‘ave a skiffy of who we all are. You sayed so yourself, Tom.’

‘That Warden knows that we’re together,’ replied Tom. ‘We’re not going to get away with it. If we try to do something like that they can declare the whole transaction null and bloody void. We need someone we can trust, outside the gang, to register the claims for us.’

‘What about your mate we ran into at the grog shanty, Luke, wasn’t it?’ Fitz asked. ‘He seemed like a straight-up bloke.’

Tom shook his head sadly. ‘I trust Luke so far and no more. If we struck it rich he’d have the deeds in his hands and we’d have no leg to stand on if he tried to take over.’

Carmody, who had been listening with his usual long face, stood. ‘Well we need someone who ain’t interested in mining on their own account, but is happy to be cut in for a share.’

‘Carmody’s right I reckon,’ said Tom. ‘We need a silent partner, someone who’ll be happy to take a share for holding the deeds and shutting their mouth.’

Tommy the Rag had been thinking hard, coiling and uncoiling his stock whip. ‘Well I seen that red-headed woman with the big black horse earlier. Maybe she’d do it for us?’

Scotty was the first to reply, head up like a wallaby in the grass. ‘You saw Red Jack? Where?’

‘She rode past with her plant this morning. I was wanderin’ around lookin’ for nuggets while you blokes were sittin’ by the fire like youse are now. She said she was headin’ fer a spot they call Caroline Pool, she’s settin’ up a horse breaking camp there.’

Just then Larrikin arrived on the scene. He’d been busy brushing his mare down by the waterside, now leading her with a greenhide halter, the muddy water still glossy wet on her swollen belly. ‘That sounds like an idea,’ he said, having overheard the conversation. ‘Red Jack would never rip us off. She don’t care about anything ‘cept for horses. The only thing would be convincing her to do it.’

‘I’ll do the blathering, if ye all are agreed,’ said Scotty. ‘I daena ken if she’ll care fer the plan or not. But I’d as like to try.’

‘Can’t hurt to ask,’ said Tom. ‘Are we all agreed, that we’ll ask Red Jack to register the claims for us, in exchange for a one-fourteenth share of every ounce of gold we win?’

Only Sandy wasn’t keen, but he was so fully out-voted that he accepted defeat. ‘If yez are all dead keen on giving away our hard-won gold to a mere lass then don’t let me stand in yer way.’

‘Without a silent partner,’ Tom warned. ‘There won’t be any bloody gold.’ 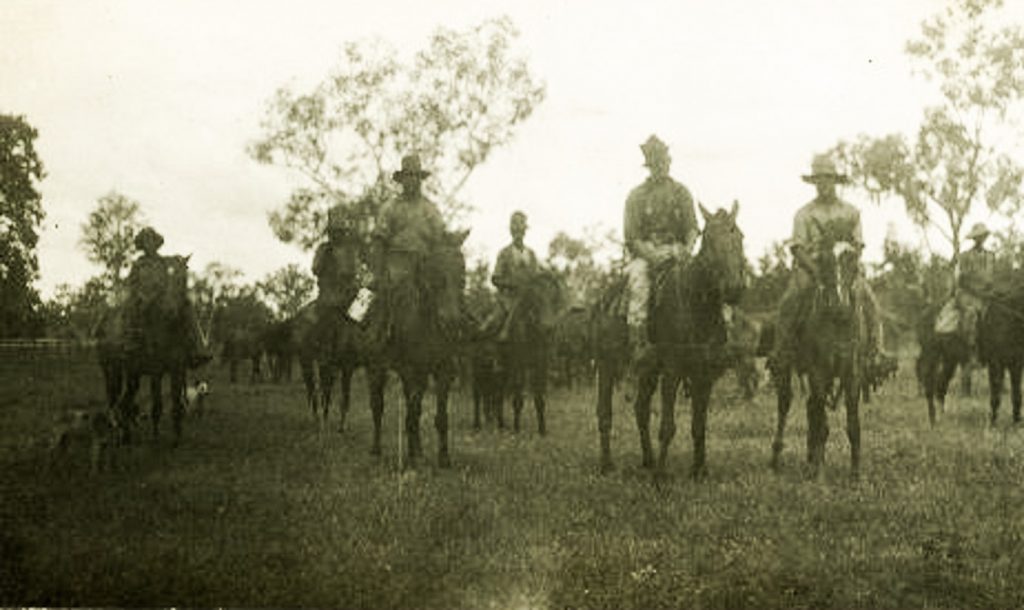 Scotty rode off with just Blind Joe leading the way, both of them on horseback, enjoying the twists and turns of the Elvire. A bank of black cloud was building in the north, and the smell of rain was a heady delight for them both.

They had no idea exactly how far it was to the Caroline Pools, but before long they saw the glistening surface of a good waterhole, and a number of horses surrounding it.

Red Jack was sitting at the fireside, plaiting greenhide into rope. Scotty rode in until he was sure that he had seen her, at which time he reined in and dismounted, while Blind Joe pulled up to wait, holding both the horses.

‘Strange,’ said Red Jack loudly. ‘I don’t remember inviting anyone into my camp.’

Scotty stopped dead. God she was bonny, red hair hanging in waves down the side of her face. Eyes like limestone pools. He could hardly get his tongue to work. It was like a dry piece of leather in his mouth. ‘I’m ‘ere fir tae ask a fa’our.’

‘Well alright, spit it out then. Unlike some people I like to concentrate on what the hell I’m doin’.’

‘The boys an’ I, being on some manner of police black list, canna register claims in our own names. We need a virtuous soul like yesel’ tae sign up for ’em in our place.’

Red Jack stopped what she was doing. ‘An’ what would I get fer helpin’ out a bunch of ruffians who I hardly even know.’

‘A one-f’teenth share a’ the proceeds of the mine.’

Red Jack threw back her head and laughed. ‘One fourteenth share of nothing is nothing. I’ve got a better idea.’

Scotty stayed for a cuppa, and when he rode back to camp it was almost dark. Blind Joe stopped him once to let a king brown snake slither off the path ahead of them. The Scotsman hardly cared, for his heart was singing with love, drunk on the sound of Red Jack’s voice and the texture of her skin.

Finally they reached the camp, enjoying the smell of roasted johnny cakes, firesmoke and rain, for a few heavy drops had started to fall, turning to balls in the dust.

They men gathered around as Scotty rode in, giving him time to get down off his horse, and for Blind Joe to lead it away. They made room at the fire and placed a mug in the Scotsman’s hand.

‘Well,’ said Tom Nugent finally. ‘What did she say?’

‘Red Jack has agreed tae act as our silent partner,’ said Scotty. ‘First thing temorra Blind Joe an’ Tom’s boy will gae’p tae her camp with the claim numbers. They’ll mind her plant while she rides intae the Warden’s office an’ registers for us.’

There was scattered applause and murmurs of approval from the others, but Scotty hadn’t finished yet. ‘There’s one wee problem,’ he said. ‘Red Jack daena want a fourteenth share a’ the mine.’

‘Well what on earth does she want?’ asked Tom.

‘The hell she does,’ spat Larrikin. ‘That foal is mine.’

‘That’s better than giving her a share of our bloody gold,’ said Sandy.

‘Since when is it better?’ demanded Larrikin. ‘I’ve been looking forward to raising that one meself. How does Red Bloody Jack even know about it?’

Tommy the Rag spoke up. ‘She saw your mare when she rode through this morning. I remember her saying how she likes the look of her.’

‘Well of course she would,’ grunted Larrikin. ‘Anyone would. But that doesn’t mean I’m giving her away. You blokes wouldn’t expect me to, would you?’ No one answered, and he picked up a small stick and chucked it into the fire so hard a shower of sparks went up. ‘Bastards,’ he muttered under his breath.

Tom winked at Scotty, as if to say. ‘Leave Larrikin to me.’ And as the rain started to fall in earnest it was as if the camp breathed a communal sigh of relief. They were not just a bunch of deadbeats sitting in a gully. They were about to become the owners of a real gold mine.