In the middle of the afternoon, Alfred Searcy and his mate O’Donahue followed their tracker up to the remains of the Ragged Thirteen’s dinner camp on the river. They walked the horses in, carbines in their laps as they rode, inhaling the smell of food scraps and cold campfire.

Some hasty drying racks over the fireplace had been abandoned. Dollops of grass had been turned, thrown by horses spurred from a standing start.

‘They left in a hurry,’ said Alfred, eyes following a scavenging goanna as it sprinted away and up into a tree. ‘Not sure why. We’re still a long way behind, and it looks like a lazy camp.’ He dismounted and held his hand flat over the hearth to judge the heat. ‘Barely any warmth there. I’m guessing they’ll be three or four hours ahead.’

‘T’e bastards are well mounted,’ said O’Donahue. ‘It might take another day or two to catch up now. We’ll have to let t’em go and ride for the Macarthur. If we hurry we can be t’ere in t’ree or four days, before t’e Superintendent sacks us.’

Alfred thought about it.  The Thirteen were long gone, miles ahead, and to follow would mean days on the hunt, most likely losing their jobs in the process. Foeleche was of German descent, and strict on discipline. Besides, Searcy also had the feeling that now a serious crime had been committed, the Thirteen might not be taken easily. Two policemen wasn’t enough for a serious pursuit.

‘Damn those bastards,’ he said, but he called for Jimmy, who was still casting around the spoor, expecting to follow. ‘You better lead us back Borroloola way, orright?’

‘Orright boss.’ If Jimmy thought it strange that he be asked to turn around so suddenly, he gave no sign. 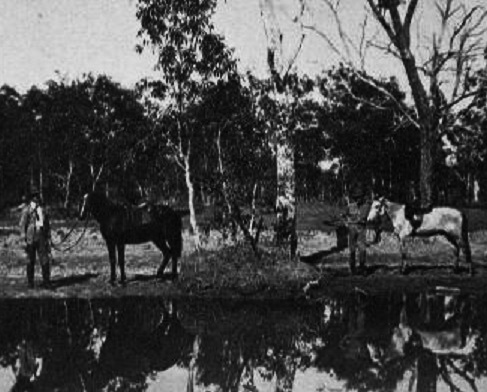 And those two mates rode like the wind. Barely straying off the trot, galloping when the mood took them and the horses seemed willing. By evening a troop of storms were out roaming the grasslands, with raking winds and the first real rains of the coming wet. Black clouds rose in columns, and lightning flickered like gunfire.

Feeling heavy raindrops, and the moisture-laden air in their nostrils, Alfred and his mate whipped off their hats and whooped and hollered with excitement.

They were half way to the telegraph line, twenty good miles down, when they headed in to a small waterhole called Clem’s Pond. Now, for the first time they became cautious, slowing the horses so they could see if any men, white or black, were there before them. There was indeed a man camped at the water’s edge, shirtless and still wet from the rain. His right leg was stuck out straight from his body and the other tucked underneath. His face was pained with fever.

‘In a bad way by the look of it.’ Alfred rode closer, looking down at the leg. There was a bloody wound in the man’s thigh, striped red with infection. A hobbled horse had been grazing in the scrub just back from the waterhole, but lifted its head to look at them.

‘I hope that’s not another stolen horse, is it Billy?’

‘No malaka. This one was gibben to myself. Cranky bastard threw me good back there, an’ got a stick through this-feller leg.’

‘You’re in luck,’ said O’Donahue. ‘Mr Searcy here is darn near as good as a doctor.’

‘I’ll do my best, anyhow,’ said Alfred. ‘We’ll see to the horses and get the billy on. Then we’ll clean that leg up and have a look.’ Jimmy had reached the waterhole with the rest of the plant and was already hobbling them out.

The leg, it turned out, had been pierced by a shaft of cypress, made up of multiple splinters, each as thick as a finger. Billy had managed to remove only a fraction of the total, and Alfred had to use forceps. Each extraction was followed by a seep of blood. The patient grew increasingly distressed, and O’Donahue had to hold him down by the shoulders, while tendons stood out in the dark skin of his neck. The muscles of his leg clenched so tight that they were like boards.

When it was done, with the wound bathed with iodine and bandaged neatly, they ate johnny cakes with treacle together and talked.

‘So where are you headed to, Billy?’

‘What do you plan to do when your leg heals up?’

‘Round Victoria River Depot way. That Ragged Thirteen have to turn up there on their way west to Hall’s Creek. You could wait ’til they arrive, then get a message to us in Borroloola.’

‘Orright, yeah I’ll do it. When my leg all fixed.’

‘If you help us catch the mongrels, we’ll give you so much tobacco you won’t be able to carry it all.’

O’Donahue fixed his eyes on his mate. ‘I like the way your mind works, Alfie. No wonder every vagabond in the north is afraid of you.’

Alfred nodded, as if accepting only what was his due. ‘Yes, once we’re established in Borroloola, and we get the word from Billy, we can slip out west and capture the damned Ragged Thirteen. This time we won’t let them go.’