Up from the Gulf on a mission of revenge, Troopers Searcy and O’Donahue rode side by side, reaching the Elsey in record time, and veering north towards the Katherine.

‘You don’t think Inspector Foelsche will be angry that we’ve ridden back all this way when we’re supposed to be on duty in Borroloola by now?’ Alfred asked.

O’Donahue shook his head. ‘Paul is a man o’ the world. He’d expect us to punish the ruffians who stole our horses and made us look like dashed fools.’ He held one fist up to his face. ‘I’ll see Tom Nugent and his cronies in chains if it’s the last t’ing I ever do.’

‘It’s a shame,’ said Alfred, ‘that the very rawness of the Territory attracts undesirable characters. I’m not talking about hard-working farmers and labourers, storekeepers and clerks. We need people such as those. It’s these dashed parasites like the Ragged Thirteen that I’m talking about. They care for nothing but themselves, and not for one minute the glory of the British Empire.’

‘I agree with ye, Alfie. If only we could close the borders to ’em. The Territory needs to be settled with intelligence and foresight. That’s not to say I don’t enjoy an adventure as much as the next man, but we don’t need robbers and vagabonds.’

The conversation kept them engrossed through the day, until just before Abraham’s Billabong they saw a rider coming towards them. A string of packhorses followed, attended by a couple of stock boys.

They both liked Kirwin. He was a rogue, but a well-bred one, for he was from a good Melbourne family, yet too wild to be contained in that city. His left arm was in a sling, so he rode one-handed. As he neared it became obvious that his face was swollen, and marked with old bruises.

The riders reined in, and the horses nosed around each other, snorted and stamped.

‘Hail there,’ said Alfred, ‘it’s nice to meet a good man on the track. Got time for a cuppa?’

‘I’ve always time for a brew with some mates.’

They stopped and lit a fast-burning fire of dry twigs, the hot flames quickly boiling the billy before dying again. It was only once they had mugs of sweet tea in hand that O’Donahue asked the question.

‘We heard about your arm, Matt, and I can still see a bruise or two on your face. The damned Ragged T’irteen had no right to do that.’

Matt’s face darkened. ‘The devil take them. Can’t you put the mongrels behind bars? I heard that you’d captured them and had them down in Roper Bar a few weeks ago.’

Alfred preened, ‘We did too. Just the pair of us. And that damned Trooper Donegan convinced us to let them go … but tell us about the fight. How did your arm get broken?’

‘I fought the Scotsman, Hughie Campbell, fair and square, and would have ground him down and won, but that fat-arsed Sandy Myrtle sat on me and broke my arm. Now, you tell me, why are you riding back this way? I thought you two were the new coppers at Borroloola?’

There was a long silence then, O’Donahue cleared his throat. ‘The Ragged T’irteen stole our bloody horses, which is why we’re riding these second-rate neddies. We’re on our way to find the bastards and arrest ’em. How about you?’

‘I’m heading back to the Roper Landing. Young Bowen will have to fend for himself from now on, God help him.’ They’d finished their tea by then, and Matt smoothed out the fire with his foot, grinding a few still-burning embers into the dust. ‘Do me a favour though. Keep an eye out for a roan gelding of mine. Young black called Billy rode off with him the same night the Ragged Thirteen raided me for beef. He’s a good horse and I want him back. The brand is a crossed diamond.’

‘We’ll keep an eye out, for sure,’ promised Alfred, and in no time at all they were back in the saddle and riding north towards the Katherine. 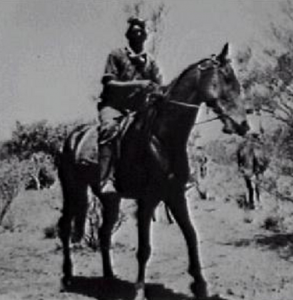 Increasingly aware that they were absent without leave from their new post in Borroloola, Searcy and O’Donahue wasted no time covering the sixty remaining miles. The heat intensified as they headed north, the sun burning like a branding iron. By mid-afternoon on the second day they were only an hour away from the town, and had already passed the camps of some lonely travellers, mostly bound for Hall’s Creek.

Up ahead through the trees there was a flash of roan, and the thunder of hooves as a horseman spurred his mount off the back legs, springing into a full gallop.

‘Whoa,’ shouted Alfred, ‘That might be Matt Kirwan’s horse. Let’s ride him down.’

Leaving their tracker with the packs, the two policemen set off at speed, the tired horses responding well. It was a wild ride through spear and hummock grass, spurs biting deep and the policemen leaning low like jockeys, eyes almost closed to exclude flying bugs and sharp speargrass heads.

This was bad ground for fast riding, however – gilgai country – pitted with hidden clay holes. The horse in front took a stumble, grunting with alarm and almost throwing the rider. The horseman got his mount under control, but by then Searcy had reached him, shouldering the horse with his own and grabbing the reins. A final dart on foot was foiled by O’Donahue who dismounted and ran the horse-thief down, pushing between his shoulder blades so he collapsed in an untidy pile.

With the horses tied securely, Alfred helped pin the fugitive.

‘By colour and brand that horse belongs to Matt Kirwan. It was stolen from Abraham’s Billabong. Consider yourself under arrest. What’s your name?’

‘Have you seen those thirteen ruffians from the Roper? Did you ride with them? Are you assisting the gang?’

Searcy and O’Donahue exchanged glances. ‘Maori Reid is in Katherine?’

‘An’ Tom Holmes. The one I seen down Abraham’s Billabong.’

‘Nugent,’ smiled Searcy. ‘That man wears pseudonyms like normal men wear jackets. Jackpot! Hey boy, now that we’ve got the stolen horse we might go easy on you: if you tell us all about this Tom Holmes we might even let you go.’

‘They gonna rob the store in Kath-ryne town.’

‘Nar, out on the river somewhere.’

‘You’ve done well, Billy. But if we do let you go, do you promise to walk back to the Roper and keep out of trouble?’

Alfred let go of his shoulder. ‘Well go on. Clear out of it then.’

O’Donahue also released his pinioning hands and let Billy up, who loped away without a backwards glance.

Alfred grinned at his mate. ‘Tonight’s the night … you and me are going to have those bastards cold.’