While Tom Nugent, Jack Dalley, Fitz and Tommy the Rag headed for the Gulf, the rest of the Thirteen struck camp and rode the track in a north-westerly direction, towards the Katherine. With the stockboys droving a plant of near forty horses they moved slowly, often with the Overland Telegraph Line in sight, six or eight miles from breakfast to dinner camp, then the same again in the afternoon, depending on distractions along the way.

After a couple of days there was no longer any difference between the South Australian mob and the Queenslanders. They were all mates now. They shared a sense of fun, and a love of the bush and its dangers.

One morning, New England Jack tried to slip on his right boot. Finding the task difficult, he looked inside to find that a brown snake had taken up residence where his foot was supposed to go. With a shout of surprise Jack threw the boot underhand, watching it spin into the air. The surprised reptile extracted itself, fell to the ground, and slithered under Sandy Myrtle’s swag. Sandy, who was sitting on it at the time, did not appreciate the visitor.

The incident brought on a spate of raucous laughter, jokes, and even a line of verse or two. Before an hour or two had passed, however, the agile minds of the bushmen had moved on to other topics. There was always something new on the track up to Katherine; bucking horses, a ‘dropped’ bullock that ‘accidentally’ ran into a .577 Snider bullet, and best of all, Larrikin’s attempts to cover his mare with Wonoka Jack’s stallion.

The poor animal had gotten the shit kicked out of him by the stubbornly resistant mare the first few times the act had been attempted. These eagerly anticipated ‘breedin’ sessions,’ saw the gang fetching drinks and laying bets before watching the poor stallion, his dark penis hanging erect, finish up with a couple of hoof prints across his face. That wasn’t the worst of it, for Sandy Myrtle’s huge mount, Jonathan James, was also taking an interest. Several times he interrupted proceedings, keen to fight for the right to cover the mare.

‘I’ll shoot that bastard of yours if he tries it again,’ promised New England Jack.

‘You’d better shoot me first,’ warned Sandy. ‘For I love that animal like a brother.’

Finally, camped on the King River, the mare gave up fighting. Fitz held her by a long halter, while Wonoka Jack brought up the stallion. This time she let him rub the underside of his neck against her shoulder, then draw deeply of the oestrous scent from under her tail. He mounted her at last, finding the place he needed with exploratory thrusts. The jokes ran free as he deposited forcefully, then slumped onto her back when he was done.

They stayed three hot and humid days on the King. The nights were not so bad. Many of the stockboys were not boys at all, but women. There was a great pretence about this. Everyone knew but no one spoke about it. Some of these relationships were full blown love affairs with tiffs and sulks. Others more one-sided. The women’s stories varied. Never mentioned aloud. Most have been lost in tearful silence. 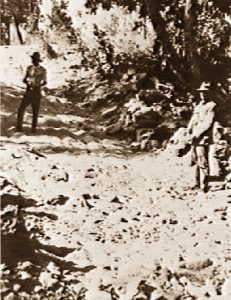 On the third night the riders from the Gulf returned. Horses and men alike were thin and dusty from hard riding. Fitz removed a bandage to show off a wound on the muscle of his upper arm, an ugly, burned channel along the surface of the flesh. His shirt sleeve was dark with dried blood.

‘A real bullet graze,’ declared Tommy the Rag, proud to bear the news. ‘He might’a come a cropper, if the aim’d been true.’

Larrikin examined the wound critically. ‘By crikey! It was made by a bullet. You’re a lucky devil, Fitz.’

Stranger still, and a source of mystery, was the fact that Tom Nugent was not alone in the saddle. Riding with him was an Aboriginal lad just a few years old. Dismounting first, Tom lifted the infant from the saddle and deposited him on the ground, where he stared with deep brown eyes at the white men, belly rounded and hair in lank curls. Even the stockboys gathered around to look.

‘He’s a bit young to be of much use,’ declared Carmody. ‘Where did he come from?’

Tom unfastened the girth and lifted his saddle down, arms taut with muscle. ‘Unlike your brother-in-law, I don’t measure people by how much good they can do me. Someone grab a chunk of damper, poor lad will be famished.’

Sandy Myrtle’s face was twisted with curiosity. ‘Can you tell us what the hell went on down there?’

‘All in good time,’ Tom said. ‘Tucker first, then a good mug of rum, and I’ll tell the yarn from start to finish.’