Matt Kirwan was no fool. He’d left a guard on the bullock carcass that hung from a chain in the yards beside the store. The guard was a young Jangman helper. White men called him Billy, though he already had a name, that they did not choose to learn.

Billy heard the Thirteen coming from a distance, walking through the scrub towards him. He was frozen with indecision, trying to guess their intentions. Should he shout and wake his white employers? Kirwan would be furious if he was disturbed for no reason. Yet wouldn’t he be still angrier if someone stole the beef without being warned? Wracked by indecision, Billy stayed where he was, squatting in the dust, every sense alert.

Thirteen men advanced out of the trees. Thirteen of the big, rowdy men who had been at the store earlier. Billy now saw their faces and the knives they carried. He was certain they were after the beef. No one, not even Mister Kirwan, could stop so many. There was no doubt in Billy’s mind whose fault this would be. 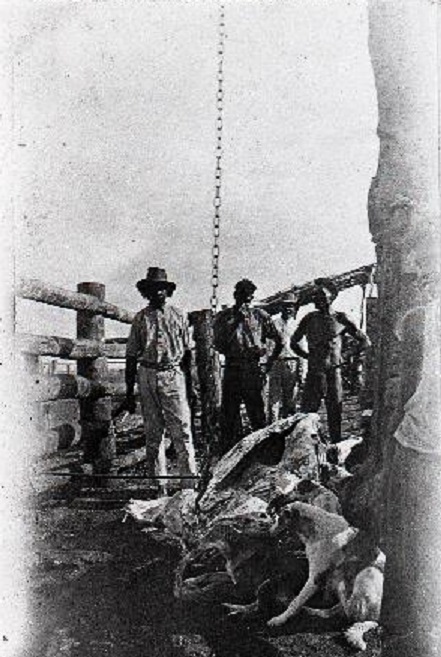 Whatever happened, trouble was coming. Serious trouble. Billy’s overwhelming impulse was to get away from this place as fast as possible. He sprang up, vaulted a rail, then sprinted into the horse paddock, where George Bowen’s grey was passing the night in peace. Billy vaulted onto the startled animal’s back. He galloped away, pausing only to open the gate, and did not turn back.

By that stage the Thirteen had reached the hanging carcass. Carmody’s nimble fingers were at the chain that held it suspended, lowering it to working height, where men and knives were waiting.

All the men knew how to butcher, but New England Jack Woods was an enthusiast, with a folding leather satchel of tools. These included a hatchet that he used to cleave through joint and rib. With razor-sharp knives he carved out huge chunks of meat; back straps and tenderloins; rumps and rounds, sirloins, briskets and ribs.

The noise of Billy’s flight on horseback, and of hatchet strokes on bone, were not lost on the occupants of the sleeping donga that stood behind the store.

‘What the hell is going on out there?’ came Kirwan’s screech.

The door burst open and the storekeeper stormed out, wearing just a pair of trousers. His bare torso rippled with muscle. His face was red with fury. He carried his shotgun in his hands as he approached them. When he pointed it skywards and fired a round, flame leapt from the barrel in the darkness. Even New England Jack paused in his work.

‘You bastards have got a hide,’ Kirwin shouted.  ‘Thieving scum – that’s what you are.’

Tom walked out to meet him. ‘Call us what you like, Matt, but you refused our fair offer to pay for the meat. That offer still stands. Take our money and we can all get some sleep. Just send down to the Elsey for a new bullock to replace that one tomorrow and everyone is happy.’

Many of the campers, wakened by the shotgun blast, gathered ‘round, ashen faced and quiet, watching as Matt Kirwan leaned the shotgun against a handy tree and began to limber up. ‘Choose your man, Mr Nugent,’ he snarled. ‘I’ll fight him one on one. If I win you can pay me for damage and loss, as well as returning the meat. If I lose you can ride off with the beef and never darken this little corner of the Territory again.’

Scotty stripped off his shirt and raised his right arm. He was the biggest man apart from Sandy Myrtle. ‘I’ll do it. Let me take the bastard on.’

Sandy Myrtle moved to his side.  ‘Good one, Scotty, I’ll pick up for you.’

It only remained to find a second for Kirwan. Bowen was hanging back near the donga, pale and shaken. No one expected him to come forward. Tom Nugent volunteered himself. ‘I wouldn’t like to see a man fight without someone watching his back.’

As the two men faced off, Tommy the Rag took up the role of bookmaker. ‘I’ll hold your bets fellers. Even money, pick your winner.’

‘Hey Matt, I heard you’ve had a few bouts of fever, how long ago?’

‘Kirwan’s lean and hard, but look at those biceps on the Scot, for fuck’s sake, if he gets a clean punch in …’

‘If is the word,’ opined Fitz. ‘I’ve seen Kirwan fight before, and he can move, I’m telling you.’

Finally, with all bets in, the fighters squared up. Kirwan went at the Scotsman hard, battering in with a jab, cross, hook and a cross. Scotty, however, was tough, with a strong neck and shoulders, and knew how to protect his face. He withstood the initial flurry and delivered a couple of probing jabs, then a right cross that thumped into Kirwan’s solar plexus.

There was a sigh from the men watching, but Kirwan was back on the attack in an instant. For the space of ten minutes or more the sparring continued: flying fists, ducking heads, rolling shoulders and dancing feet, with both fighters tapping wells of blood on the other man’s face.

A break in the routine came with Scotty almost tripping on a tree root. Distracted, he caught a solid right hook in the temple, a blow that would have seen most men tumbling to the ground. Instead be floundered forward and pushed Kirwan with both hands in the chest, sending him sprawling.

The storekeeper sprang back to his feet, shook the blood and sweat from his head and took his stance. But his concentration faltered, whether from the dark, or having been recently wakened from sleep. He let in a beauty from Scotty, a magnificent straight right, that took him on the mouth. His legs folded and down he went.

‘That’ll do,’ Tom said, going to the storekeeper’s side. ‘Throw in the towel, Matt, you’ve proved your point.’

Scotty stepped back, grinning, but Matt Kirwan struggled to his feet and growled through bloody lips. ‘No way, I’ll bring the bastard down yet.’ With that he tore into his unprepared opponent with a flurry of body blows. It didn’t take long for Scotty to respond, however, and another powerful right landed on Kirwan’s nose, sending a spray of blood and the storekeeper flying.

Groggy but determined, Kirwan again tried to get back up, though his legs, seemingly, would not support his weight.

The big man pushed Kirwan down. ‘The fight’s over, Matt. Scotty’s murdering you.’

Sandy sat on the struggling man, who wheezed and carried on, struggling like a madman. ‘Let me up you fat lump. I can’t breathe.’

‘Not until you agree that the fight’s over.’

Sandy grabbed Kirwan’s arm and twisted it, and there was a shriek of pain. ‘Alright, for fuck’s sake, just get off me.’

When Sandy stood up, Matt Kirwan’s arm was hanging at a crooked angle from the elbow. ‘You broke my arm, you idiot.’

Kirwan stood, breathing like a bull, unsuccessfully trying to wipe the blood from his face on his good forearm. ‘Don’t dare come back this way again, you lot, or I’ll fill your hides with buckshot.’

Tom tipped his hat. ‘You’re game Matt, and I admire that. But if we want to come back this way, then we will. And don’t ever say no to us again.’

The two men stared at each other until finally, Matt Kirwan turned and walked towards the donga, a defeated slump to his shoulders.

Tom, Fitz, Jack Dalley and Tommy the Rag rode off, down towards the Gulf, just as the first white and yellow glow of piccaninny dawn was showing on the eastern horizon. The air smelled fresh and full of promise, scented with the spice of adventure.

Fitz yawned, for none of them had slept a wink. Tom’s face took on a serious frown.

‘Bear up you blokes. We’ve fifty miles to cover before we throw our swags tonight.’