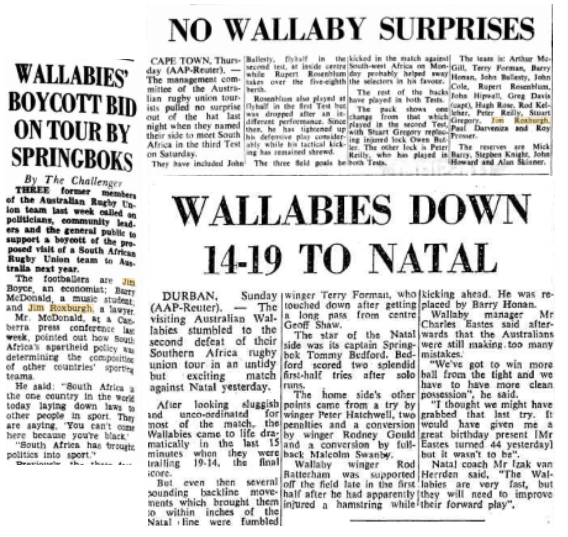 I was lucky enough to know one of the main players in this little story from Australia’s recent history. Everyone knew that one of our English teachers at high school had played rugby for the Wallabies. We’d also heard that he’d done something special. It wasn’t until later in life, however, that I found out more about what he had done.

Jim Roxburgh was a big, shaggy man, wide across the shoulders and heavily bearded. Years earlier, in the late sixties, when Jim was playing for Australia, South Africa was a divided country. A minority white government, led by the National Party, was determined to keep the black majority and white minority separate. Also segregated was a third group labelled as “coloured.” This was an ugly system with an ugly name: Apartheid.

In 1969, Australia’s Wallabies toured South Africa. Young Jim Roxburgh wore the Australian jersey with pride. He played prop, a relative lightweight against the hulking 130 kg Springbok forwards, yet playing with the determination and bravery he was famous for.

But things happened on that tour that would change him forever. Rugby audiences were generally all-white, but on this tour, in an attempt to display racial unity, black crowds were rounded up and forced to watch and cheer. In Pretoria, one of the flimsy, temporary stands that were used to hold them collapsed, and the Aussie players helped carry the maimed and injured to ambulances while many of the white South Africans merely watched.

During one game, the black crowd started cheering for the Australian team in a show of protest against the system under which they lived. South African police responded quickly. They used dogs, batons and sjamboks—hippo hide whips—to subdue the crowd, battering them into silence, while the Aussie players watched helplessly from the field.

I still remember the English lesson when Jim told us this story. We were a bunch of rowdy country boys, but you could have heard a pin drop while he talked, choking up then, well over a decade after the event, trying to tell us something important in that slow, careful way of his. He told us of something that should offend all humanity. Something that never should have happened.

Two years later, in 1971, the Springboks crossed the Indian Ocean to tour Australia. Jim joined six of his team mates in a stand that will go down in history. Seven national Rugby Union players: Jim Roxburgh, Tony Abrahams, Jim Boyce, Paul Darveniza, Terry Forman, Barry McDonald and Bruce Taafe, refused to take the field for the Wallabies against the visitors. Rugby’s “Magnificent Seven” as they have been called, would not play the representatives of a regime that not only didn’t consider non-whites for selection in any sport, but treated their own people with brutality and contempt.

Our Prime Minister at the time, Billy McMahon, condemned Jim and his comrades as a “disgrace to their country.” They suffered abuse and catcalls from die-hard fans. They were blacklisted from playing Rugby, and only one of the seven was ever selected to play for Australia again. Their careers were over. Yet they folded their arms and explained that they saw playing against the Springboks as tantamount to condoning the apartheid regime. The “Magnificent Seven” stood firm.

As I said, Jim was an English teacher, and a good one. But the main thing he did for me was much deeper than grammar. He inspired me, especially as the years passed and I learned more about what he did and how powerful a symbol it was at the time: almost certainly helping the Australian government towards a decision to officially sever all sporting ties with the South African regime in 1972.

Every boy needs a hero, and moral courage is the greatest of human attributes.